Retro Game of the Day! The Ninja 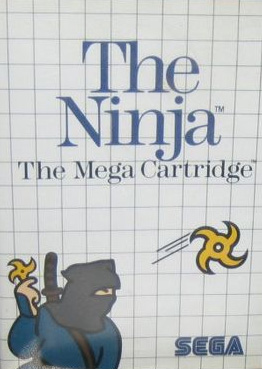 The Ninja (or Sega Ninja) by.. Sega, original arcade release in 1985 and porting to the Master System a year later. 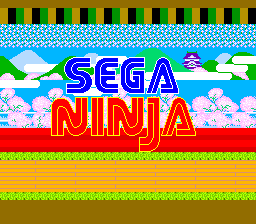 Known as Ninja Princess in Japan, this was a run-and-gun (sort of) type of game where you play (what else!) a Ninja battling armies of evil in Feudal Japan. The original game had a female protagonist, though in the console version they turned the hero into a man. Yawn! 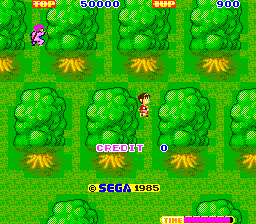 A unique little game, and one that reminds me of a more primitive Pocky and Rocky for many reasons, this (mostly) vertical scroller arms you with shuriken (Ninja throwing stars) to shoot at your foes. One button will always shoot straight forward, and the other will permit 8-directional shooting, it's actually quite unique and feels pretty cool. 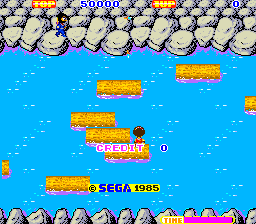 The game is quite colorful and fanciful, as many games were in those days (especially Sega games of the period). Even all these years later it's fun to fire up a game like this and get absorbed in the color and the cutesiness.. it's a charming world with lots of character, and it's fun to kill evil Ninjas! 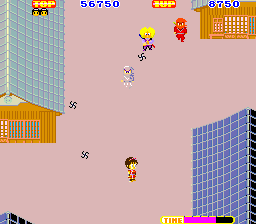 And you'll kill plenty of them too - they run at you, they pounce on you from rooftops, they send coyotes after you, they charge you with blades swinging. Every level ends with a big Fro-headed Samurai fellow who launches his own volley of Shuriken at you, and you need to blast away at him before he overpowers you.

The Ninja is an extremely dated game from a distant place in gaming, but it is still quite fun to look at in play and reminds one of a simpler, innocent, and purer time in the medium.