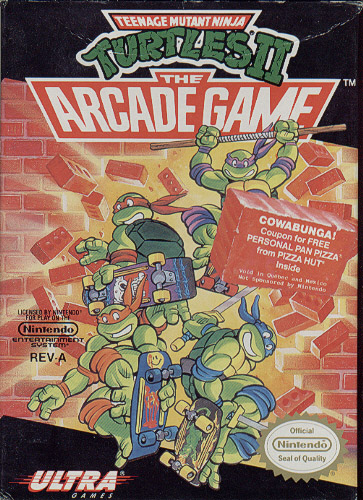 A bit of an interesting story here. The Teenage Mutant Ninja Turtles were one of the huge cartoon/toy/comic book crazes of the late 1980s. It fell in line that it should be a huge videogame craze as well, and Konami handled that accordingly. Their 4-player arcade game did the brand complete justice, not only being one of the best comic-book-to-video-game translations ever produced, but moreover it was one of the most popular video games, period, ever created.

Konami released a NES cartridge around roughly the same time, though it was completely different from the arcade machine; though it was highly anticipated, that game has a very polarized audience (and its' legacy is not too wonderful). So when it was announced that the beloved arcade game was going to receive a NES conversion as well, the news was met with much acclaim.

The game arrived, in suitably stripped-down form, with much of that same acclaim as was heaped on the expectation. No one really expected that the NES downgrade would hold a candle to its arcade big-brother, at least graphically; though it did pull off some nice-looking scenes (for the NES). Most importantly, the gameplay felt intact enough to convey the appropriate gameplay experience. The new TMNT NES game was a hit!

A side-scrolling beat'em-up, the NES game followed the arcade's successful formula of taking the arcade machine's cues from Double Dragon gameplay, simplifying things a bit, and dressing things up with a very trendy theme and super-accessible style. This was a big success, and in many ways felt like sort of an apology for the first NES game (which I personally did enjoy...!) 2-player mode was the necessary icing on the cake, and it set the trend for a series of successful follow-up games as well.