Retro Game of the Day! Splatterhouse 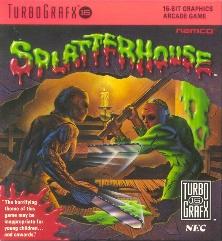 Splatterhouse by Namco, originally released in the arcade in 1988 in Japan (next year in North America) and famously (?) ported to the TurboGrafx-16 in 1990. 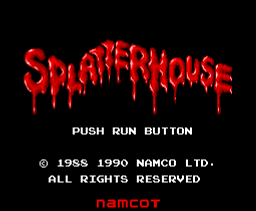 It feels appropriate to type about this game right now, as my girlfriend has a little bit of a cold and so every other moment the otherwise peaceful silence is punctuated by her snorting and sniffling the disgustingly juicy mucus that's oozing out of her nose back up in there, so that it can drip out and get snorted back up again. But then, this is not a column about my social life, this is supposed to be a column about my retrogamin' life..

So, what of Splatterhouse then? This game tells the story of Rick, a man on a mission to rescue his girlfriend from the Undead. They found themselves in a haunted mansion, and you can guess what happened. Long story short, he finds a haunted mask ("the Terror Mask") which grants him incredible strength. Armed with his trusty 2X4, the Jason Voorhees clone ventures through the depths of the Evil Mansion to reclaim his true love from the clutches of the damned.

A charming little game, Splatterhouse arrived on the scene at a time when there really wasn't much glorification of gorification in videogames. This wasn't exactly explicit, but it was rather disgusting in its way (and for crying out loud, the name of the game "Splatterhouse" used a drippy bloody font). You knew what you were in for! Still, videogames were only newly getting graphic, and so this raised its fair share of eyebrows in its day.

Gameplay consisted of the lumbering hero generally moving from left to right, as is typical in so many of these action games. You would punch, kick, and (of course) splat your foes with a plank as you fought your way to each level's boss room. The levels were appropriately gory and drippy, as befit the name of the game. 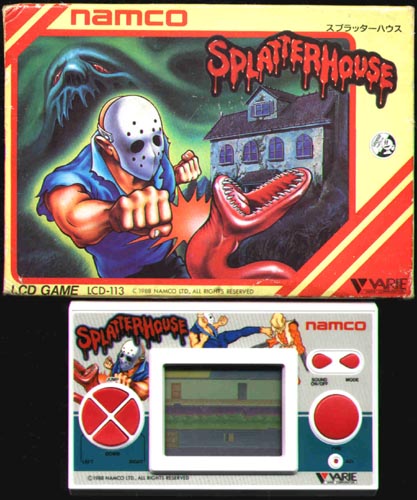 Overall, Splatterhouse was a bit of a clunky title with a very straightforward presentation, but its theme appealed to the B-Move crowd and it did stand out with its originality. Now if you'll pardon me, I need to go find a kleenex for my girlfriend!