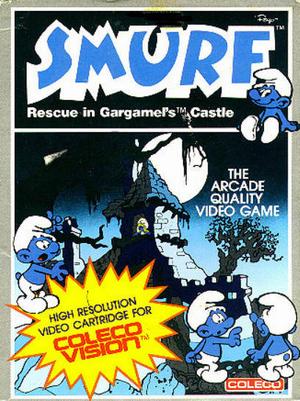 Smurf Rescue in Gargamel's Castle by Coleco, (that is, I am pretty sure it was by Coleco!) released in 1982 on the Colecovision. Apparently there was an Atari 2600 version as well, though I wasn't aware of that until right now! 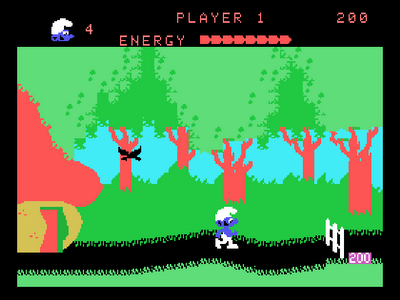 Ah, the early '80s. That golden, cherished time, when so many of us were so young and stupid and bright-eyed and the world was filled with wonder, sugary cereals, cartoons, and a new toy called videogames. The Smurfs cartoon was how many of us would start those beloved Saturday Mornings, before strapping in for some Looney Tunes, Flintstones, and ultimately some Super-Friends.

And the Smurfs cartoon.. okay it was a little syrupy, even for 6 or 7 year olds, but it was still fun to watch, with all the different characters (who were usually irritating one another anyway). One day, as often happened, a videogame just sort of "showed up" as they often did back then. What's this, a videogame about the Smurfs? How is it?

Answer.. not too shabby! A side scroller, very basic and simple, but quite colorful and interesting nonetheless. In fact this might actually have been the very first side-scroller I ever saw.. The goal of the game was to simply dodge enemies as you passed through the four levels, on a quest to kidnap Smurfette (of course) from the enemy's lair.

Smurf Rescue was simple, the control was a little loose, and those Coleco controllers might have not done much to make things easier by being badly designed.. but no one cared. This was a happy colorful Smurf game, and it was pretty fresh when it was new. Besides, there was a trick where you could make Smurfette's clothes fall off on the final screen if you knew what you were doing. This game was alright.