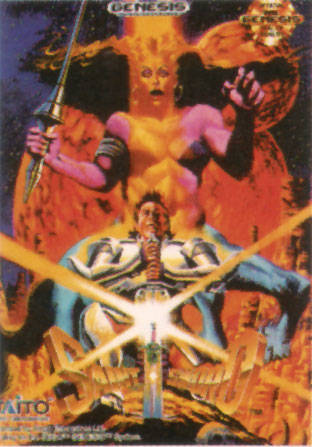 Saint Sword by Taito, released for the Sega Genesis in 1991.

I'll echo what has been said elsewhere - Taito is one of the pre-eminent developers in videogaming history, but tragically they seemed to sleep through the 16-Bit period, strangely. They were present, and they released a fair amount of product, but for a developer who should have been merely a step below the likes of Sega or Nintendo at the time, they were really resting on their laurels with a lot of the home software that was released. Not all of it was lackluster, but there's not much that I can remember that was particularly noteworthy.

That being said, what they released wasn't exactly garbage either - just half-baked. And so we have a game like Saint Sword, kind of a goofy name with uninteresting screenshots which I still rented for some reason. And in spite of my tone, I did enjoy playing it for an evening or two; unfortunately, once you get past the initial gimmick, the game becomes quite stale.

In a world full of Castlevanias and Rygars, Taito would have done well to follow the trend and soup this up a little with a little stronger level design, mechanic, and of course aesthetic. The premise was cool enough - you're a sword-wielding hero who can morph into different creature forms (centaur, merman, angel) and you must plow through levels and defeat enemies. There weren't many games featuring the morph technique in some fashion or other, and generally this was handled quite well and memorably. Upon first playing Saint Sword I dug it because it felt like a more fleshed-out Altered Beast. Getting into it, the game felt more and more like a half-hearted Rastan than anything else (minus much of what was good about ol' Rastan!)

Not to keep name-dropping, but what is really irritating in hindsight is that this could potentially have played out like a souped-up version of Legendary Axe. One of my favorite of the first-run 16-bit generation games, it did inspire a little group of games and Tatio would have done well to incorporate some of the spark and love that was in those games. Sadly, the truth was that some of these development houses were keen to just pump this mediocre stuff out, even with such a powerhouse name as Taito behind it. For shame!

In the end, what we have wasn't a bad game, there was much worse than this. The game looks bland, it controls a little janky, and the theme is not exactly breathtaking. Still, this game had something cool about it that manages to stay with you in spite of itself. These games still inspire me to think where gaming could go today, if we weren't so wrapped up in Open Worlds and Uncanny Valleys. A modern day Saint Sword could really fulfill on some of the promises of the original premise. Sounds like crazy talk? Not likely, but I would like to see it done right!