Retro Game of the Day! R-Type 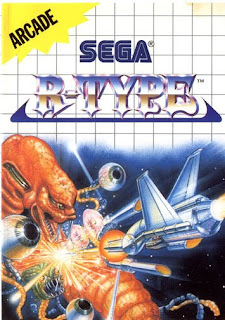 R-Type by Irem, arcade release in 1987 and ported to several systems in the following years. Today the concentration will be on the Sega Master System port, released in 1988. There was also a release with the launch of the TurboGrafx-16 in the States, another year after that.

Yes, R-Type - called "The Led Zeppelin of Shoot-em-ups," this game is known far and wide even all these years later as being one of the true genre-defining legends. It's story is strange - published in the arcades in the West by Nintendo, but appearing only (at the time) as a flagship Sega Master System cartridge, R-Type was a bit of an anomaly. I never saw the arcade until years later, but I did see the commercials - and then I got my hands on the cart.

The game was a sight to behold, one play and it was evident why we weren't getting this on the NES. The graphics were up there with the best of what was available at the time, the shooting action was intense, the stages and enemies were iconic and memorable. Shooters were far from a novelty (NES gamers had been enjoying the likes of Konami's Gradius and Life Force for years by now!), but this title changed the game in a lot of ways. Suddenly the genre was much more exciting then ever! 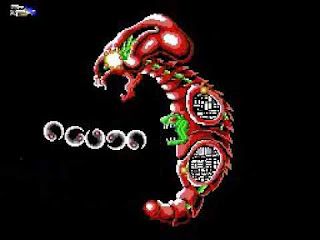 The shots shown here are simple, a lot of sacrifices had to be made to get this to squeeze into the Master System's memory - even so, it was impressive. Dig up some shots of the TG-16 or arcade versions, and the pixel art still looks impressive and beautiful even in the modern day. The SMS version made a concession by throwing in a new level not found in the arcade or other ports.

R-Type stood out from others of its ilk by introducing the "Force" pod, a power-up which you could detach from your fighter and use as a free-floating "option" - or you could stick it to the rear and blast away at foes behind you. It was invulnerable ("hmm why didn't they just build the whole ship that way?") and could pass effortlessly through background scenery which would otherwise smash you - and was helpful to use as a shield from enemy fire. You could power up your weapons 3 times, using a vertical shot, a 3-beam reflective laser, or the awesome Ring Laser which ripped through enemies and just.. looked really cool. Additionally, you could pick up two separate "bits" which would each hover above and below your craft. Interestingly, they'd only fire if you used the Ring Laser - R-Type was the first game, to my knowledge, to give the player such an interesting "extended family" of firepower devices. 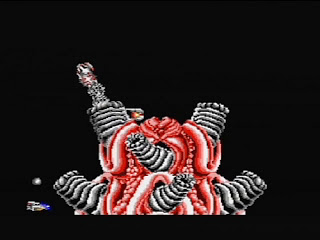 Also unique to R-Type was the "charge beam" - you could blast away with your rapid-fire finger, or hold down the button for a moment and charge that puppy; unleash away and a deadly, singular shot would release, very helpful when engaging bosses. Speaking of which, all the bosses in the game were gloriously and meticulously rendered, many looking like something out of HR Giger's nightmarish psyche - and it would be shameful to forget to mention the third stage battle cruiser, which you'd destroy in phases before engaging its engine for the final takedown.

The original R-Type kicked off a hugely popular series, which has evolved even to this day - it has made appearances on several platforms in the years since, and many of them have been spectacular above-average efforts enjoyed by many. For me, I will never forget the first time I was clued into this cartridge, when suddenly shooters became extremely important to me!