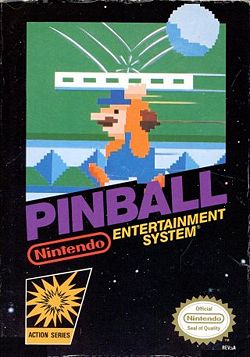 Pinball by Nintendo for the NES, original arcade released in 1984 (never mind that title screen!) and launched with the home console as part of the launch lineup in 1985. 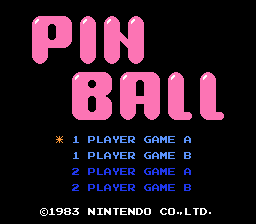 And so, here we have another oldie-but-goodie. Pinball for Nintendo is about as stripped-down as you are going to get, but what would you expect - the game originally released when it was still novel to even have colors in a video game, much less multiple options! 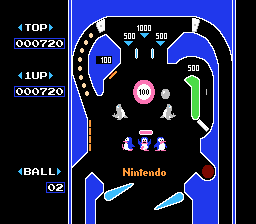 That being said, the game was a nice, if spartan, presentation. A two-screen table with some cute little animations to keep things peppy, and you could even get into a "bonus room" featuring Mario and then-squeeze Pauline for some Breakout-style action. A tack-on, but this was not really seen at the time, so back then it was pretty spiffy. 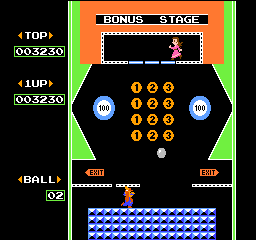 Pinball was a good, clean game back in the day - pick-up-and-play in it's purist form, and it was nice to have a competent Pinball game on the system. No frills, but still quite addictive between the presentation and the physics and all of that. Most probably wouldn't give this game a second look these days, but if you load it up, you might find that you have a hard time putting it down so quickly.