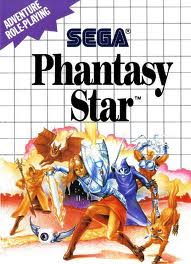 Phantasy Star by Sega, released for the Sega Master System in Japan in 1987 and the following year in the States.

A truly jaw-dropping game when it was released, Phantasy Star was the game which all the Nintendo-loving kids would sit bolt-upright and suddenly take notice "what is that game again?" where they would usually scoff at a mention of any game for "the other 8-bit console." Sega's crown jewel in the Master System period, PS was such an elaborate leap into a new direction that most folks didn't even know what to make of it, though one thing was evident; this game was special. 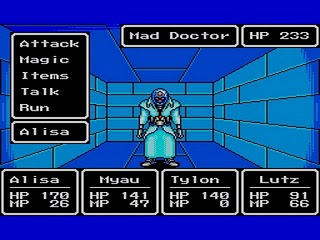 RPG games had not yet arrived in the US yet as an important mainstream genre, and PS was absolutely the first game to introduce it to us, and breath-taking manner. This looked so different than any other SMS game, also any NES game and of course anything that had come before. Animated 3-D mazes in first-person view, wild and complicated large enemies to battle, lush cut-scene portraits, several party members to assemble and equip, plenty of gadgets and even vehicles. Also, 3 whole planets to explore! Phantasy Star had it all.

Of course, by giving you the world, the needed to charge the world as well. The game cost between $70 to $80 at most outlets, and the cart was packed with a whopping 4Mb of memory, much larger than any console game available at the time. The whole experience screamed premium.

All of this, and in some ways it felt like such a gigantic waste. The Sega Master System floundered in the West, and RPGs were still a long way out from catching on, especially with the console crowd. While this game was incredible to behold, it felt more mysterious than anything. Most people seemed generally disinterested in the SMS compared to the more popular Nintendo machine, and so Phantasy Star discussion was pretty unheard-of on the schoolyard in the late 1980s.

Fortunately, the game was rich and impressive enough to outlast its hurdles, and built up quite a strong legacy which charged up in the successive generation (and still maintained relevancy decades later). Picking up the original Phantasy Star in the modern period is a little tough, as the game seems very primitive/limited compared to modern RPG conventions - yet it is still a fascination to behold even now, particularly when held up against other games of the period.