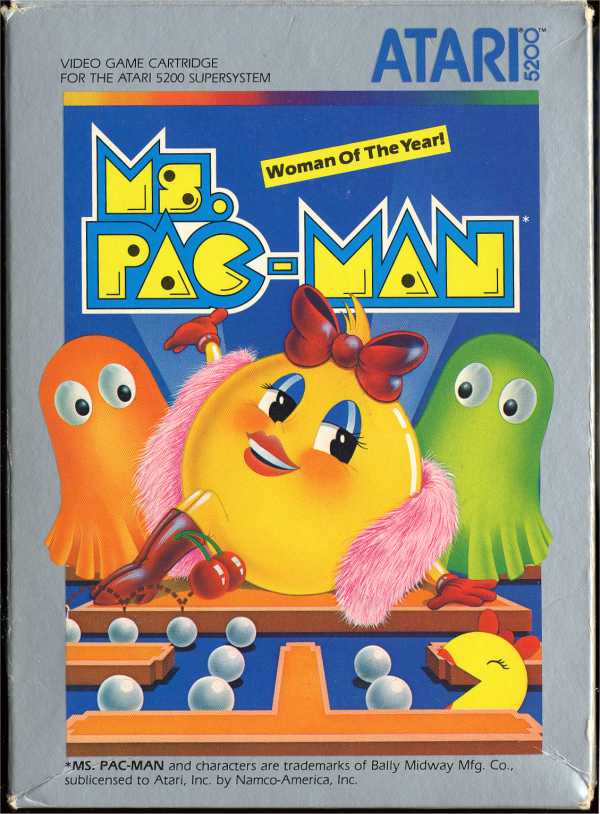 Ms. Pac-Man by Midway, released 1981. It is the last day of the year (and the decade..!) What better idea could be more fitting than to bring up one of the most important games in history?

Ahhh.. Ms. Pac. Just looking at these screens still brings me back to the Papa Gino's Pizzeria on Rt. 20 in Marlborough, Massachusetts - that's where I got my introduction to this historic game. I remember the pizza grease smears from little kid hands all over the control panel. It didn't matter. Ms. Pac-Man was revolutionary! I was a Pac-fiend when I was 5 or 6 yrs old. I loved the game. I loved the cartoon. I had a Pac-Man birthday cake and bookbag and trashcan. You get the idea. 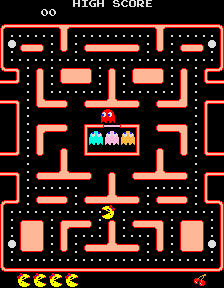 This game has such a strange story - there's no way I can do it justice. Suffice it to say that Ms. Pac was actually an American bootlegged hack of the original Japanese-developed Pac-Man game. I've never seen Crazy Otto, but supposedly that was the original moniker. I am not sure if the game upgrade was being distributed and Midway (original Western Pac-Man distro) caught wind, or what - all I know is that there was a lot of angry lawyers, and General Computer (the punks that made the bootleg) ended up working for Midway to convert this to a genuine Pac-sequel. Mind you, this was not kosher with the original Pac-developer (Namco) and I would suspect there was a great political rift between the two companies as a result - though Namco's most likely "forgiven" the dalliance seeing as how they've made millions of dollars in the process (they release Ms.Pac-Man games still to this day!)

What's the hot air all about Ms. Pac then? Here's a simple rundown for those of you who don't.. oh who am I kidding. Everyone knows this game! The original Pac was a hungry yellow mouth who cleared a single screen by eating all the dots, picking up stationary fruit prizes, and avoiding ghost monsters. Ms. Pac improved on this by not only modifying the maze, but adding 4 colorful variations in total. Also, the fruit is no longer stationary - it enters from a side warp, trots around the screen, then leaves through the other side if uneaten. As for the ghost monsters, their patterns are far less predictable this time around.

Many folks know (and love) the famous "sped up" Ms. Pac-Man mod. Normally, as in the original Pac, the game would start out extremely slow and pick up speed as you blazed through the rounds. In the speed-up hack, you start out with a Ms. Pac who is absurdly faster than the ghosts - providing a nice boost for the casual player, but completely destroying the balance and rhythm of the game! 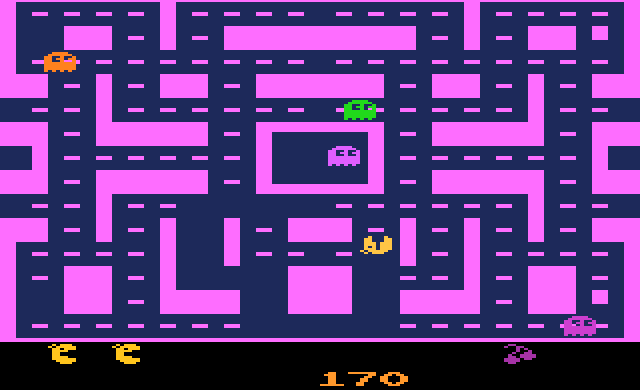 There's so much to say about Ms. Pac-Man, but I like to keep these reviews brief, so I'll just leave it thusly - few games have managed to penetrate our culture continuously since they first appeared, and still can be considered universally acceptable and enjoyable so many decades later. The styles of Ms. Pac-Man - gameplay-style, visual-style - are still very approachable and successful today as they were when this was a new game. Anyone who sits down to a game and puts a little time in will find a very deep arcade experience, one which can be tailored as the specific player grows with the game. There's been many games spun off the Pac-formula, but in my opinion (and I'll say it's likely the general consensus) that Ms. Pac-Man is and always will be the best version by a clear shot.

This is it - the final day to take advantage of our FREE offer! Go on and download Headcase Games' original release of iFist right now, friend - it's the last day of 2009, and after today we will charge for it once again! Enjoy our game - and thank you for your patronage! 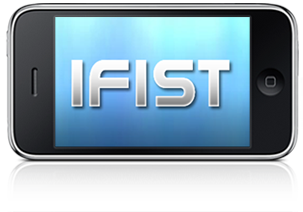