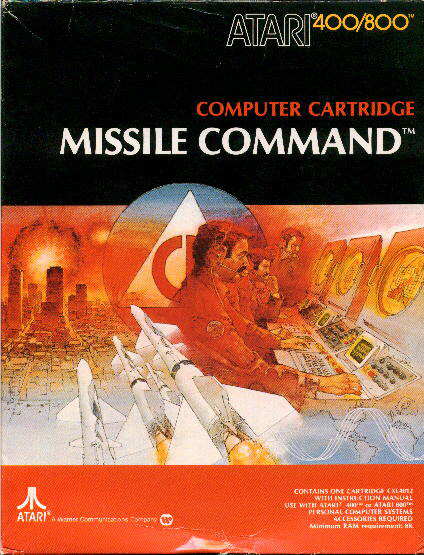 Ahhh, the early 1980s. Ahh, the Cold War between the Russkies and the Yanks. Ahh, the impending sense of doom which consumed our culture as we disco'd the nights away naively. Ahhh, Reagan and his Star Wars Strategic Defense Initiative. Such was the world that made possible a popular game called Missile Command.

The game was designed around the notion that you must defend several cities (levels) from nuclear attack. Lines representing missile descend on your city from above, and must be taken out using one of three anti-air cannons. In the original arcade setup, a trakball-controlled crosshair is used to set the path of the protective rockets - to properly function, you'd need to shoot towards an enemy missile's probable flight path (miss the head and your rockets will be useless). Cannons have limited ammo and so must be used conservatively; also, cannons can be destroyed by fire and rendered useless. A level ends when all of the enemy missiles are destroyed (or your city is leveled!)

A very cool game, very original, a lot of fun - but definitely creepy food for thought, especially at the time it was originally produced. Ultimately the game is an exercise in futility, humanity will perish, it is just a matter of how long until you can not fight back anymore! Dark stuff. 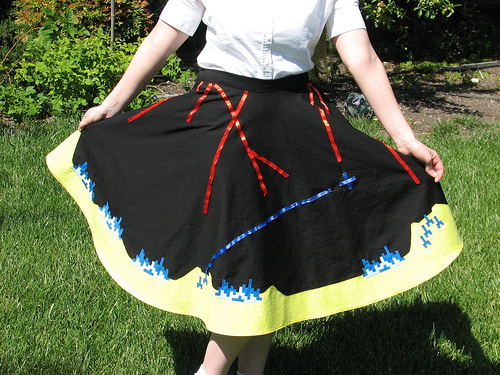 Any girl who is cool enough to wear a Missile Command skirt is definitely the one I want to marry! I must find this woman!