Retro Game of the Day! Mercs 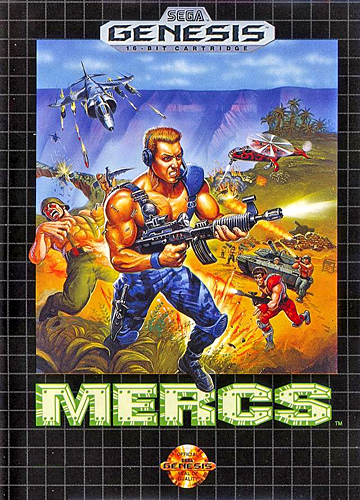 Mercs by Capcom, arcade release in 1990 and ported to the Sega Genesis in 1991 by Sega. 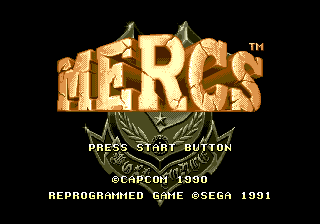 Another game emerges from the mists of the past - this one, a sequel of sorts to the much-loved older game Commando. Alright, I guess Bionic Commando was also a sequel to that game, though more in name only while Mercs actually evolves on the original's gameplay (and there are zero ties to Bionic to be found in here). 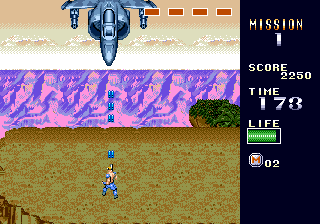 When Mercs hit the arcades, the game was touted in the press as being a "Turtle Killer" (The Teenage Mutant Ninja Turtles arcade game, in all it's 4-player glory, was absolutely cleaning house). I am not so sure why it was expected that Mercs would dethrone the king, and I can't say that this happened. The game was alright, it was definitely a good time (and for what it was worth, the 3-Player simultaneous mode did go a long way to enhancing the experience) but I'll expect that run'n-shoot games were never as popular as walk'n-slash games.. 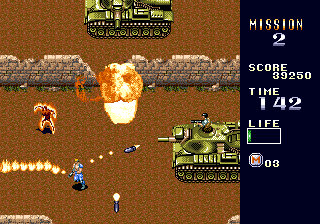 The game basically did a turbo of everything that was cool about the source material, and played all the better for it. It was still a top-down "kill everybody" adventure, although new weapons were added, tons of new enemies, much better graphics, power-up vehicles (tanks, etc). More and better, more and better..

The home port was alright, and should have been a more memorable game. They added in a special remix mode as well as an arcade port, so you got a lot of meat for your dollar. Unfortunately, they pulled a huge Lame and stripped the multiplayer mode out, which was a very good reason for me not to even bother renting the game. I still scratch my head when I think about how great an 8-bit military action game like Contra was, augmented by the fact it was 2-Player - and then what should have been a superior follow-up with a title like Mercs, and they remove the 2P feature for the home version? At the end of the day, I'll recommend checking out the arcade version of Mercs, it's the superior experience.