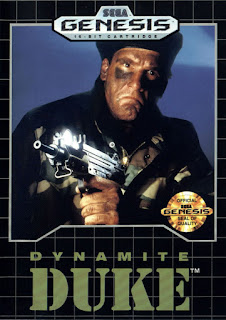 Dynamite Duke by Seibu Kaihatsu, original arcade release in 1989 and porting to the Sega 16-Bit a year later. 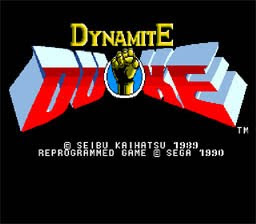 Here was a peculiar little gem from a third-tier (at best) developer - and yet somehow games like these wound up securing a home release on a major console anyway. It always boggles my mind how that wound up happening rather regularly.. 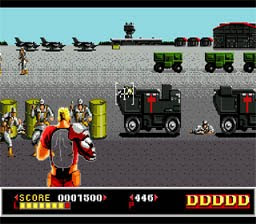 Dynamite Duke was a bit of a stylish attempt at recreating an Operation Wolf experience without requiring a gun accessory, something that happened occasionally (Cabal, Nam 1975) with middling success. In that alone it is worth investigation, though shortly following boot-up the average player will realize why this type of game was never particularly successful.

Like Dead Angle, another "behind the back" shooter of the time, you control a soldier who blasts into the screen with your artillery - and since you are controlling an avatar, you can physically move out of the way when you're being attacked (as opposed to a first person game, where basically "YOU"are the screen). This does make it difficult to control your character and attack things, but the game is interesting enough that it tempts you to play a little bit more.

Unique to this game is that you have a "cybernetic arm" as well, and can punch the crap out of enemies (specifically bosses). This is nice for mixing things up, but feels a little half-baked. 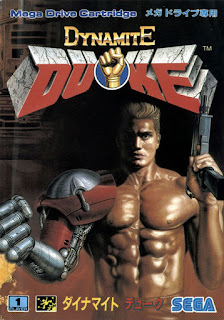 Overall the Duke is one of those weird Japanese games which I want to like more than I actually do, and owing to its novelty I will pick it up and enjoy a session here and there. To this day the game has its fans (and detractors!), personally I appreciate the period it came from and the scene that inspired such strange games as this. They may have failed, but at least they were trying something different!