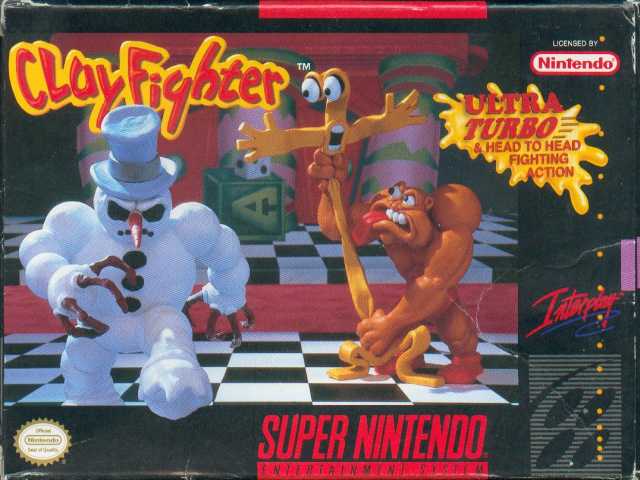 Clay Fighter by Interplay, released for the SNES in 1994.

Of course, we can all remember that there were two very distinct periods in videogaming history: Before Street Fighter II, and After Street Fighter II. And never again would the world be the same. 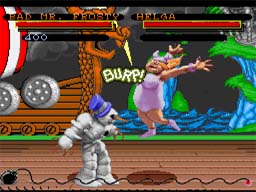 SFII so traumatized the entire landscape of the videogaming culture, that when the dust cleared there were plenty of wanna be's ready to take that game's place. Clay Fighter was just one name on that long, long list.

CF did have an interesting trick up its sleeve - for a 1-on-1 brawler, they did away with the typical "anime combatants or robots competing for top spot of the tourney" (often with storylines that took themselves a little too seriously) and went rogue with a decidedly tongue-in-cheek take on what was usually a very technical type of action game. 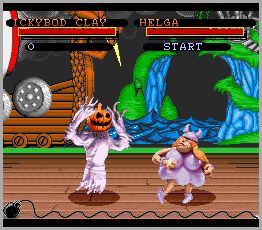 Supporting this theme, and likely causing it, was the fact that the game characters were digitized "claymation" characters, which was quite an anomaly in a video game (then, and now!) Seeing such a presentation on the SNES was quite impressive. Sadly, what the visuals had in punch and color, they had to sacrifice in framerate, and so this was an excessively choppy experience as a result. Choppy and fighting games don't mesh to well, and ultimately this felt like another half-baked effort. Still, the presentation was unusual and interesting, and for a little while there Clay Fighter was the talk of the town.