Retro Game of the Day! Astyanax 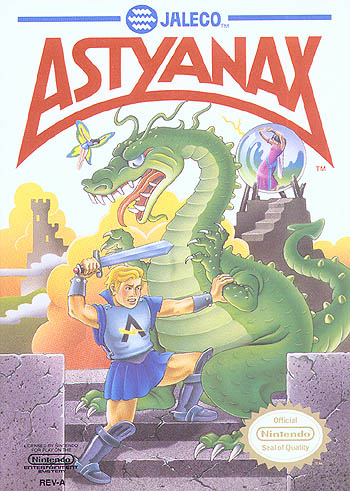 Astyanax by Jaleco, 1990 release for the NES.

Another semi-interesting story on this game. Once upon a time back in 1989 there was a videogame system which no one bought got a TurboGrafx-16 ("pull up a chair, kiddies, and I'll tell you a story...") There was a remarkable game available for that system when it launched, and it was called The Legendary Axe. You played an axe-wielding barbarian sort, and you journeyed through forests and caves butchering enemy creatures. The graphics, sounds, and design in this game were really sharp and it was a lot of fun to play - but not enough to merit buying the whole system (my heart went to Sega!) And so, no Legendary Axe for me.

Some time later, a magazine trumpeted that a game styled like this was releasing for the 8-Bit NES, a system I did own. I knew better than to expect the game to match up to the 16-Bit experience of Legendary Axe, but at this point I was tuned in, and so I rented the game to give it a spin.

What I received is what you see before you. Arriving late into the system's life, Astyanax had a lot of stiff competition to go up against (not just the 16-Bit stuff, but a lot of fancy 8-Bit software as well). In that regard, I considered it fairly lackluster compared to what else was available. It didn't look bad, but it did appear rather plain and uninteresting. The animation of the main character was also sloppy and choppy, and where the Legendary Axe guy moved smooth with nice animations, this guy just looked awkward. His jump looked really stupid! (The box art also looked pretty dumb...) 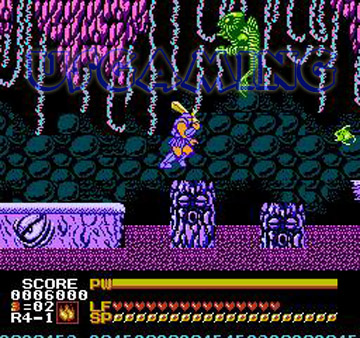 Overall I was disappointed with the game. The gameplay designs weren't bad, but the aesthetic turned me off. Interestingly this was based off of an arcade game with the same name, but a much better style (and much closer to what I was expecting). The arcade was also handled by the same designer responsible for Legendary Axe (this port, I am not too sure). I'll have to give it a run on MAME someday and get a writeup for it.