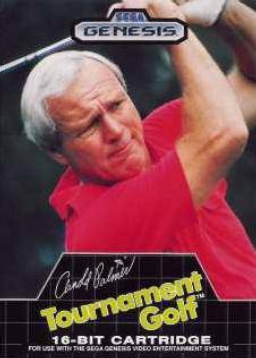 Arnold Palmer Tournament Golf by Sega for the 16-Bit Genesis system, this game released shortly after the system's US launch in 1989.

Well, sad to say, but I must face facts - I am not a real man. I don't know squat about golf. I know that it involves hitting little balls with sticks, and trying to maneuver them into holes with as few hits as possible. There's a lot of things I don't know - my Dad was never into golf. He never showed me how to shave, or tie a tie. He didn't even watch football or hockey! Honestly, it's amazing that I have ever even figured out to kiss a girl, at this point..

Anyway, because of these shortcomings, my youth was spent jumping on video mushrooms and murdering endless waves of aliens. Any gamer worth his salt is well aware that there's never been a shortage of sports-themed videogames, in fact the (arguable) "first" video game was called "Tennis for Two." So as the years went by, and video games became fashionable, sports titles have grown into an understandably huge staple of many gamers' diets.

As for me, I never really had many that sucked me in - sure I enjoyed the NHL Hockeys, the Blades of Steels, the Track and Fields. But Golf? Never really been a golf guy. And yet - my friend had this title, and something about it always appealed to me, and I always had to borrow the game from him. 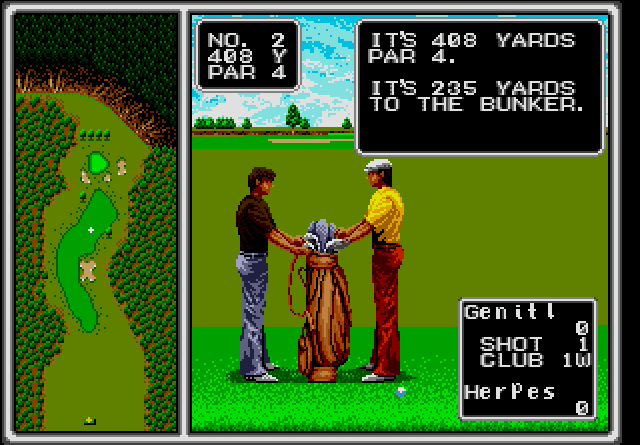 Golf games always seemed boring and stuffy to me.. something about a fake video game about standing outside was always odd to consider, yet Arnold Palmer on Genesis was just a relaxing, happy little rendition of golf. It was still an arcade-style game, so they didn't get all hung up with reality, stats, and nitty-gritty; but it was not terribly fast and loose either. Certainly one of the more mellow experiences I'd ever had on my Genesis, and through the years it's actually a game I like to pick up and tool around with occasionally when I do need a video golf fix.

This game came out at the beginning of a revolution - it might look like nothing now, but this was actually fairly stunning to look at compared to any 8-Bit golf titles on offer otherwise. The music was soothing, the presentation was clean, and honestly the control handled super-slick. They even stuck a very miniature game of Fantasy Zone in as a bonus (accessible only if you were a terrible golfer!) Golf's never been my game, but I am getting older, and now this stuff is feeling up my alley.