Retro Game of the Day! Abadox 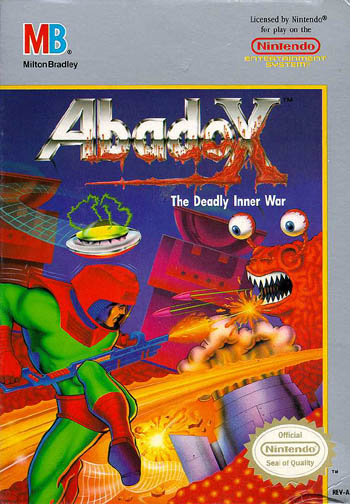 Abadox by Natsume, released in Japan in 1989 and the following year stateside for the NES.

So, what is this strange little shooter all about? Doesn't look very hot - certainly isn't terribly visually appealing at first glance. Shooters should be colorful, detailed, and fun - Abadox just looks brown, orange, and.. veiny. And the box art is among the worst I have ever seen. Upon firing up the game, the player is greeted with immediate challenge, sludgy and stiff controls, an unappealing main character, and lack of auto-fire capability.

Many of those who get that far into this game are likely to dismiss it following that less-than-stellar first impression. That's a shame, because Abadox is certainly more than just another slapped-together game! Sure, it's "just another shooter" and it looks like a low-grade ripoff of the much more stylish Life Force. But those who spend a little time getting to know their Abadox will be in for a treat - a well-designed shooter and a true challenge, this appears to be Natsume's first foray into the game industry (from my uneducated standpoint) and they really wanted to make a splash. 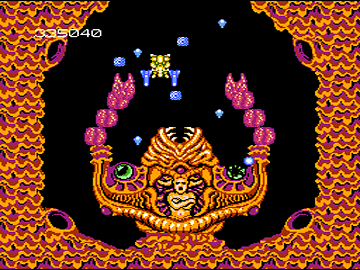 The game has a lot of heavy challenge on par with shooters like R-Type, though again, not as stylish or aesthetically pleasing. You almost could argue there's not many reasons why Abadox can't go toe-to-toe with a game like that, but certain deign choices really prevented it from getting there. Again, R-Type - also a game known for being drippy and gooey (remember level 2?) had a nicer overall layer of polish and a more satisfying main character. Abadox sports some wonderfully intense challenge and design, but the price of admission is just a bit too high. 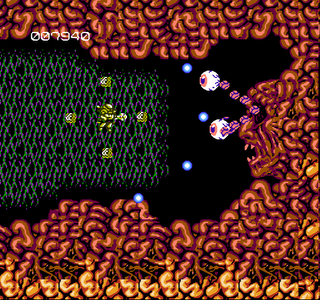 When this title was first announced, I believe it was billed as "a product of Natsume - new company started by former employees of Capcom and Konami," sounds like a dream team right? This isn't hard to see, and though history has really forgotten Abadox, what it has left behind is a challenging, good-looking 8-bit game which still is worth a (patient) modern gamer's attention. Dig this one up and see how well you can handle a vert shmup that scrolls downward!