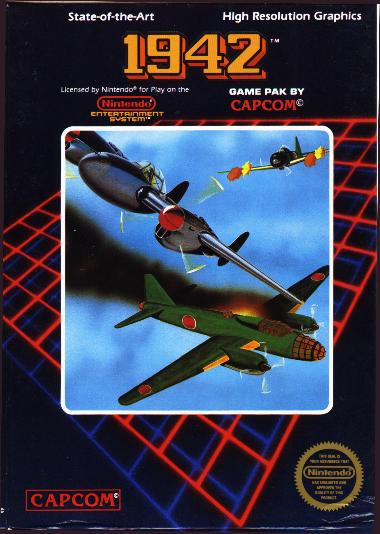 1942 by Capcom, original arcade release in 1984 (which should be a videogame in its own right, if you ask me). 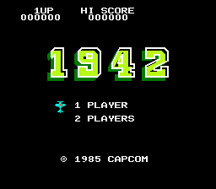 So, 1942 is a curiosity to me. Not that I don't know what the game is, because come on, but rather because the game has maintained some manner of strength of dignity through the years, despite its horribleness. See? I can sense people becoming mad at me already! "How dare you! 1942 is a WONDERFUL game!"

Granted, when it was fresh, the game was interesting - in the arcade, back during the Cretaceous Period. When they ported this software to the NES, it was featured alongside Commando and Ghosts 'n Goblins as Capcom's initial entries into the home Nintendo console market. Say what you will about those titles - their quality far outclassed this episode. 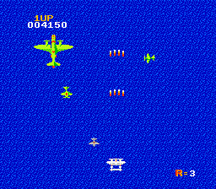 1942 is a vertical shooter ("shmup" to us nerds) that places you in a P-38 warplane, tasked with taking on the entire Japanese Squadron and blowing them all to Kingdom Come (interestingly enough, this was a Japanese-designed title). War Guilt? Anyway the premise is cool enough - but the execution is doodie. Drab colors, stuttery gameplay, endlessly boring missions. I guess the carriers look pretty cool for their time - and any game which gives you powerup items isn't all bad. But the overall presentation here is awful. You get a tiny, sad-sounding chorus at the beginning of the game, followed by endless tapping and beeping for your soundtrack. Everything about how this looks and plays is choppy.

Still, it was an early effort and for that it is forgivable (I just wish people would forget the game existed! Oh wait, perhaps I am not helping things then). On the flip side, they produced an impressive sequel that did away with everything gross from the first installment and made a title that actually looked awesome, sounded great, and was fun to play again and again. Check out 1943 instead!