Gameplay-altering Power Cores detailed ahead of the Early Access and Game Preview launch on 4 August
Secret Mode
July 21, 2022
[This unedited press release is made available courtesy of Game Developer and its partnership with notable game PR-related resource Games Press]

Manchester, UK – 21 July 2022. The countdown has started: Hugecalf Studios’ arcade-style racing game Turbo Golf Racing is ready to tee-off for Xbox Game Preview and Steam Early Access on 4 August 2022, with an RRP of £14.99 | €17.99 | $17.99. It will also be available Day One on Game Pass, and Game Pass subscribers can now pre-install Turbo Golf Racing on Xbox Series X|S, Xbox One and PC.

Ahead of launch, Hugecalf Studios has announced the full line-up of Power Cores to reveal how players can pick and choose a combination of skills that suit their individual playstyle.

Power Cores are Turbo Golf Racing’s secret weapon: each one activates either Passive or Active abilities to help you perform above par… and score below par. Passive Cores grant ‘always on’ bonuses, while Active Cores are triggered with a button press, and players can sandwedge up to two Power Cores inside their car chassis: either selecting one Active and one Passive ability, or two Passive skills.

Magnet
Magnetises the ball towards your car

Big Ball
Increases the size of your ball

Curve Ball
Adds more spin to your ball, making it travel with more of a curve

Small Ball
Decreases the size of your ball

Spring Ball
Increases the bounciness of your ball

Straight and Steady
Removes spin from your ball, making it travel straighter

Double Dash
Allows the car to dash twice whilst airborne

Sand Master
Car will not be slowed by bunkers

Experimenting with the interplay of different Power Cores is an important tactic to secure the advantage. The right combination of Power Cores enables racers to enhance their strengths or mitigate their weaknesses in the sprint towards the finish flag.

More Power Cores will be added to Turbo Golf Racing in the future as free content updates, alongside new Seasons, cosmetic items and even full courses. 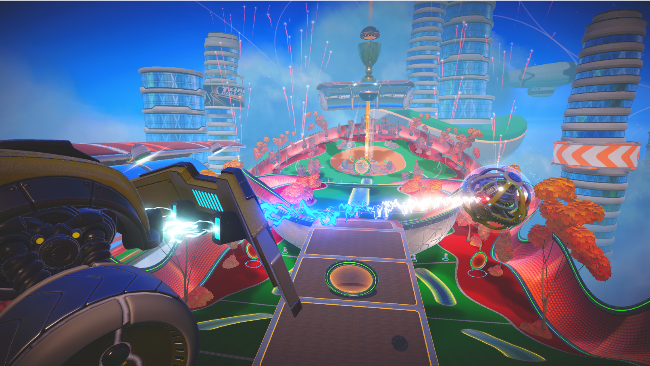 About Turbo Golf Racing
Turbo Golf Racing is a fast-paced arcade-style sports racing game for up to eight players, all competing to see whose speed-putting skills are up to par. Racers flip, glide, and dash their turbo-charged cars down winding fairways as they strike their oversized golf balls toward the finishing cup.

RACE YOUR RIVALS TO THE FINISH
Welcome to the future of motorsports. Feel the excitement of fast-paced arcade-style racing as you tee off with your friends in an exhilarating new way. Jump, flip, glide, boost, and dash with turbo-charged cars and be the first to get your ball in the hole.

EIGHT PLAYERS ONLINE
Race with up to seven other competitors in a Grand Prix-style competition. Hit the boost pads to charge past your rivals, take secret tunnels to outwit them, and fire missiles to stop them in their tracks.

POWER CORES
Get the edge over your rivals by unlocking and equipping Power Cores. Hit your ball further, fly faster, and use unique abilities such as Magnet and Quick Flip. With a wide variety of Power Cores, fine-tune your setup to outwit your friends.

TURBO-CHARGE YOUR CUSTOMISATION
Choose the car and ball that makes you stand out from the crowd. Enjoy endless paint options, and change your wheels, spoiler, shield, car body and boosters.

TAKE TO THE SKIES
The sky’s the limit when your cars have wings. Launch your turbo-powered car into the air and fly past the competition. Zip through tunnels, glide over fans and chase your ball over obstacles.

TACKLE THE TERRAIN
Use the terrain to your advantage. Launch over the boost pads, and down the fairway. Avoid the rough and the sand traps. Bend your shots around trees and through canyons. Race to the green.

It is our current expectation that Turbo Golf Racing’s Early Access period will last approximately 12 months.

Turbo Golf Racing is now available to pre-install via Xbox Game Pass and will be playable from 4 August 2022.

About Secret Mode
Greetings from The Bunker! Secret Mode is the newly founded publishing wing of the award-winning Sumo Group Ltd. Our goal is to publish internally developed projects from any of our 14 game development studios across the UK, US, Europe, and India, as well as third party independent game developers. We believe that games are for everyone, and that creativity has no limits. We believe quality and fun are everything.

About Hugecalf Studios
Hugecalf Studios is an indie game studio founded by friends and family. Awesome people have joined us along the way. We are united by our passion for games. Our philosophy is simple: follow the fun. Come and talk to us on Discord.
www.hugecalf.com
www.discord.com/invite/turbogr