Osaka, November 26., 2021 – During IgroMir, Russia’s largest gaming event, legendary fighting game developer SNK announced that one of their most beloved games – THE KING OF FIGHTERS ‘98 - will get even better. THE KING OF FIGHTERS ‘98 ULTIMATE MATCH FINAL EDITION will receive a major Steam update this winter, adding major online features eagerly awaited by the community. Interested players will be able to check out these new features in a Community Beta Test (CBT) from November 30th to December 4th.

One of the most important features of online matches in modern fighting games is rollback netcode, making online matches more precise and circumventing delays caused by latency. THE KING OF FIGHTERS ‘98 ULTIMATE MATCH FINAL EDITION’s original, delay-based netcode will be swapped with the fan-acclaimed, state-of-the-art rollback netcode by Code Mystics. 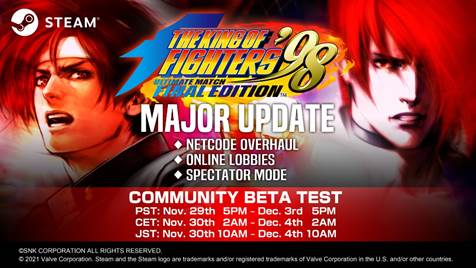 THE KING OF FIGHTERS ‘98 ULTIMATE MATCH FINAL EDITION also receives online lobbies, offering more than just 1 v 1 matches. Players can host or join large rooms with multiple players for epic online battles. And if they simply want to observe and learn or cheer on their friends, they can join online battles via spectator mode.

Before the update goes live this winter, there will be a Community Beta Test, allowing SNK to collect player feedback. From November 30th at 2 AM CET to December 4th, 2 AM CET, players will be able to check out the online lobbies and spectator features.

For further information for UK and Italy please contact:

Headquartered in Osaka, Japan, SNK develop, publish, and distribute interactive entertainment software on a global scale. Known for such franchises as THE KING OF FIGHTERS, METAL SLUG, and SAMURAI SHODOWN, SNK continues to focus on their rich console game and arcade history.