Prepare to Venture into Armageddon on Current-Gen Consoles in Endzone - A World Apart: Survivor Edition

Take a look into what awaits players after the apocalypse in new trailer!
Assemble Entertainment
April 28, 2022
[This unedited press release is made available courtesy of Game Developer and its partnership with notable game PR-related resource Games Press] 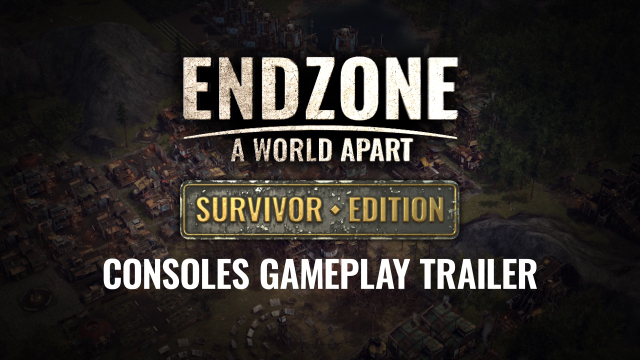 “While it’s been a long-time desire for us to bring Endzone to consoles, the UI overhaul required to adapt such a deeply immense strategy game is nothing short of a challenge,” said  Stephan Wirth, Co-Founder and Experience Lead, Gentlymad Studios. “We’re so excited to share this lovingly created game with new audiences come May, and we sincerely hope players enjoy the experience we’ve crafted for consoles.”

Boasting over 5,000 positive reviews on Steam, Endzone - A World Apart puts players in charge of rebuilding society in a world ravaged by a global nuclear holocaust. Colony denizens face realistic and terrifyingly prescient crises like radioactive soil, scarce clean water supplies, and tumultuous and deadly storms. The console version, dubbed Survivor Edition, will introduce a new range of players to the world of Endzone, where they’ll be responsible for the last remaining settlement of humans who’ve emerged to the Earth’s scorched surface following 150 years of nuclear holocaust, having survived in underground bunkers.

Thank you in advance for sharing this news with your readers. If you’d like to speak to the minds behind this hugely popular post-apocalyptic indie title, just let me know.

Despite the company's short history, Assemble Entertainment has won the German Developer Award twice — in 2020 and 2021— in the category "Best Publisher.” Assemble Entertainment organizes GermanDevDays, an annual conference held in Frankfurt, Germany since 2016 that attracts more than 1,100 attendees from across the German-speaking video game development industry. The event also includes the GermanDevDays Indie Award, where indie development teams across Germany can participate in varying categories to win a cash prize for their projects. The event is hosted by Stefan Marcinek, CEO and Founder of Assemble

The Koch Media Group is a global developer, publisher and distributor of video games, VR

The group’s publishing activities, marketing and distribution extend throughout Europe,

America, Australia and Asia. Koch Media has more than 25 years of experience in the

digital media business and has risen to become a leading global publishing partner. The

consoles, PC and VR platforms across all physical and digital channels.

With its parent company in Höfen, Austria, and the Publishing HQ in Munich, Germany,

well as Japan and Hong Kong.

studios around the world.

with business primarily in Germany, Switzerland, Austria and Italy as a cinema, TV, online

Entertainment, a leading video game merchandise company in Munich, Germany, and the