Save the Date for the Soulframe Dev Transition Stream, Warframe Devstream 163, and Warframe Prime Time 316 Announced for August and Early September on Twitch
Digital Extremes
August 17, 2022
[This unedited press release is made available courtesy of Game Developer and its partnership with notable game PR-related resource Games Press] 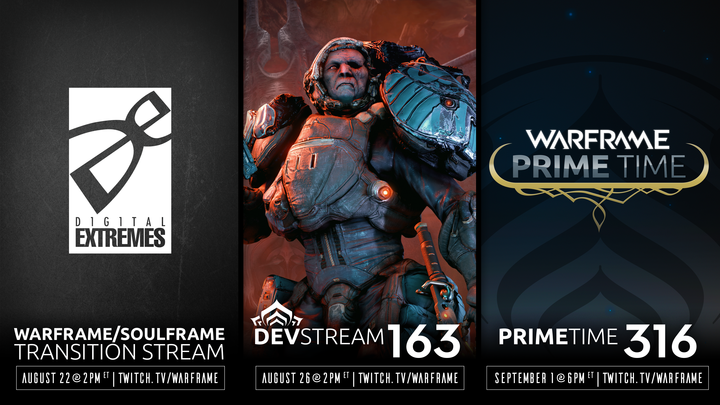 WHAT: Key dev leads are coming together in community-first fashion to give players a download on the development path moving forward for both Soulframe and Warframe. Tune in for the debut of Soulframe’s 4K announcement trailer, alongside a fireside chat where the team will be answering questions from the community and providing more transparency around the internal changes at Digital Extremes. With Science Fiction and Fantasy genres now under one roof, Digital Extremes is preparing to carry its sprawling sci-fi universe of Warframe into a new bold chapter, while peeling back the curtain just a bit more on Soulframe’s development.

To jump in on the action now, players can reserve their Soulframe in-game name today by declaring their Envoy at www.soulframe.com and can follow Soulframe on YouTube, Twitter, and Instagram to stay updated on the latest news.

WHAT: For Warframe’s first devstream following TennoCon 2022, Digital Extremes is thrilled to offer players a first-look at the studio’s upcoming Veilbreaker update, bringing players more hands-on action with fan favorite Grineer Kahl-175 in a new post-The New War quest, along with new missions and a host of cosmetic and QOL enhancements to the Warframe experience. During the stream, attendees will also be treated to the full reveal of Warframe’s 50th playable Warframe, Styanax, launching alongside the Veilbreaker update, with the team exploring this formidable new frame’s gameplay aesthetic, design, and powerful abilities.

Revisiting the Duviri Amphitheater In-Game Relay from TennoCon 2022, Digital Extremes is excited to offer players another opportunity to experience a slice of the Duviri Open World hands-on during Devstream 163. Available on all platforms, players only need to launch Warframe during Devstream 163 on Friday, August 26, navigate to Earth on the Star Chart, and select “Duviri Amphitheater” to join other Warframe players in-game and explore a small piece of Duviri’s Open World launching Winter 2022.

Expect major surprises along the way in addition to Platinum giveaways for select lucky viewers.

[Spoiler Warning] This Devstream will include a discussion around The New War and will review critical narrative moments and other major expansion highlights.

WHAT: Warframe’s Prime Time streams are back following TennoCon 2022! Returning with Prime Time Stream 316, Warframe’s community of players are invited to join Director of Community and Live Operations, Megan Everett, and other Warframe community leads as the team plays Warframe live for attendees while discussing and showing fan art, concepts, and other Warframe hot takes. As with every Prime Time stream, select lucky viewers will be randomly selected to win Platinum.

[Spoiler Warning] This Prime Time stream may include spoilers to Warframe’s narrative and storyline, including recently released expansions and updates.

WHERE: All streams are live on Twitch www.twitch.tv/warframe | Also streaming on YouTube | Watch on Nintendo Switch with the free YouTube App from the Nintendo eShop