New meta-game with base camp, side missions, a mysterious story and more added. The game is available for free on the Epic Game Store for a limited time ​​​​​​​
Daedalic
April 14, 2022
[This unedited press release is made available courtesy of Game Developer and its partnership with notable game PR-related resource Games Press]

Hamburg, Germany, April 14th, 2022 - Insurmountable, the roguelike adventure where you bravely tackle the intimidating heights of three mighty mountains, today receives a major free update, adding a whole new meta-game with side missions, a brand-new story, a broader variety of maps  and much more. To properly celebrate the new update, the game is available for free on the Epic Games Store until April 21st. The game is also available on Steam and GOG.com 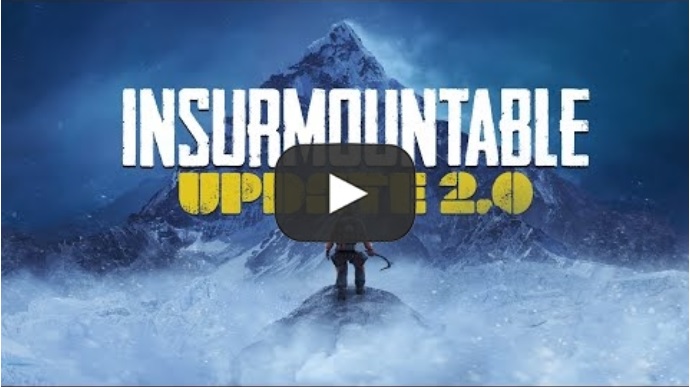 This brand new trailer shows what the game is all about:
https://youtu.be/37BzE-sHlxY

In Insurmountable, players brave three dangerous peaks looking for the ultimate mountaineering challenge. As one of three playable climbers with different backgrounds, they have to manage the terrain, weather and unpredictable events waiting for them on their adventure. Every decision counts and preparation is key.

With Update 2.0, the experience gets vastly expanded with an all-new meta-game. Players now have to not only climb the three main mountains, but also complete several side-missions. In-between missions, they return to their base-camp, proceed with the story, manage their upgrades and prepare for their next climb.

Insurmountable is currently available on Steam, with the 2.0 update going live on April 14th. At the same time, the game will also be available on GOG and the Epic Game Store - on the EGS for free for a short time.