SEARCH
A minimum of 3 characters are required to be typed in the search bar in order to perform a search.
Press Release
7 MIN READ
Press Release

Fight For Your Faction in Sea of Thieves Season Eight

Dive into on-demand player versus player ship combat in the Battle for the Sea of Thieves!
Rare
November 22, 2022
[This unedited press release is made available courtesy of Game Developer and its partnership with notable game PR-related resource Games Press]

The ‘Return of the Damned’ Adventure may have come to a close, but the battle between its two opposing sides is only just beginning! In the eighth Sea of Thieves Season, this brewing rivalry breaks out into a full-blown Battle for the Sea of Thieves, pitting crew against crew to determine whether the Guardians of Fortune or the Servants of the Flame will rule the waves. So man the cannons and pick a side – there’s a war to be won.

If you’re eager to get into the heat of this ongoing battle, worry not: Season Eight is available from November 22nd as a free update for all players with Xbox Game Pass, across Xbox Series X|S, Xbox One, Windows 10/11 PC and Steam.

As always, Season Eight will also offer 100 levels of rewards for all players to unlock by just playing the game and raising their Renown – rewards including cosmetics, gold and Ancient Coins. Players also have the option of purchasing the latest Plunder Pass to access premium items not yet available anywhere else! Find out more about how Seasons work in our Seasons Explained and Plunder Pass Explained articles. 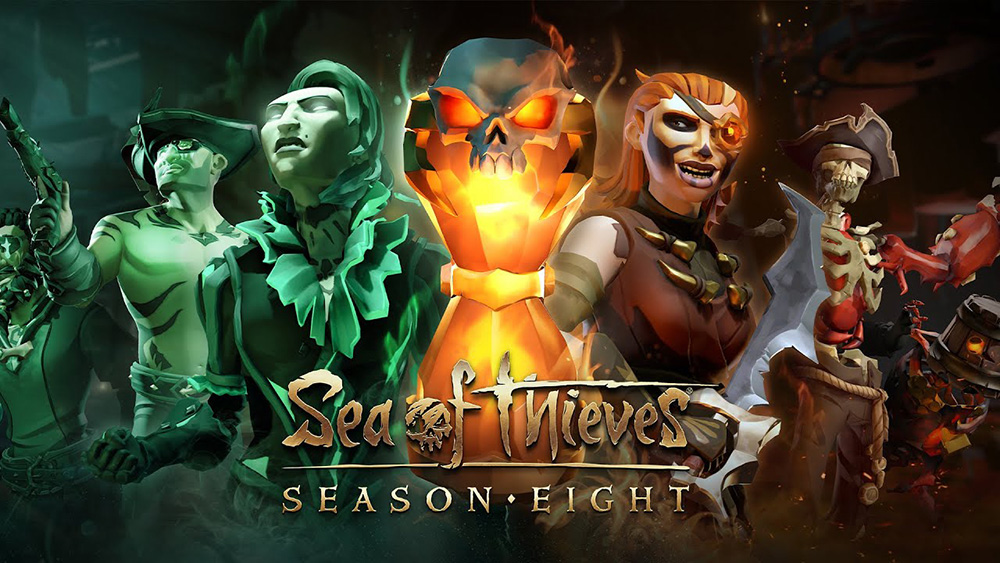 Caught between the opposing ideologies of the Pirate Lord and Captain Flameheart, the Sea of Thieves has descended into open warfare. Using the new Hourglass of Fate on their ships, all pirate crews who wish to join the fray can vote on a Faction to side with: the Guardians of Fortune, backed by the likes of the Pirate Lord and Belle, or the Servants of the Flame, fuelled by the hunger of the Reapers and their loyalty to Flameheart.

Once you’ve chosen your Faction, the goal is simple: sink as many enemy ships from the opposing Faction as you can. Unfurl the War Map, dive beneath the waves and enter head-to-head showdowns with crews of similar ability to your own. Fight and win, and you’ll earn Allegiance and unlock Faction rewards!

Building up a streak of defeated enemy Faction ships will also result in boosted Allegiance, and sinking four or more in a row will mark you as a Faction Champion! Be warned though, becoming a Champion will make you visible to any other players in the area and taking you down will grant them a greater boost than usual. An enticing target for any pirate looking to make a name for themselves. 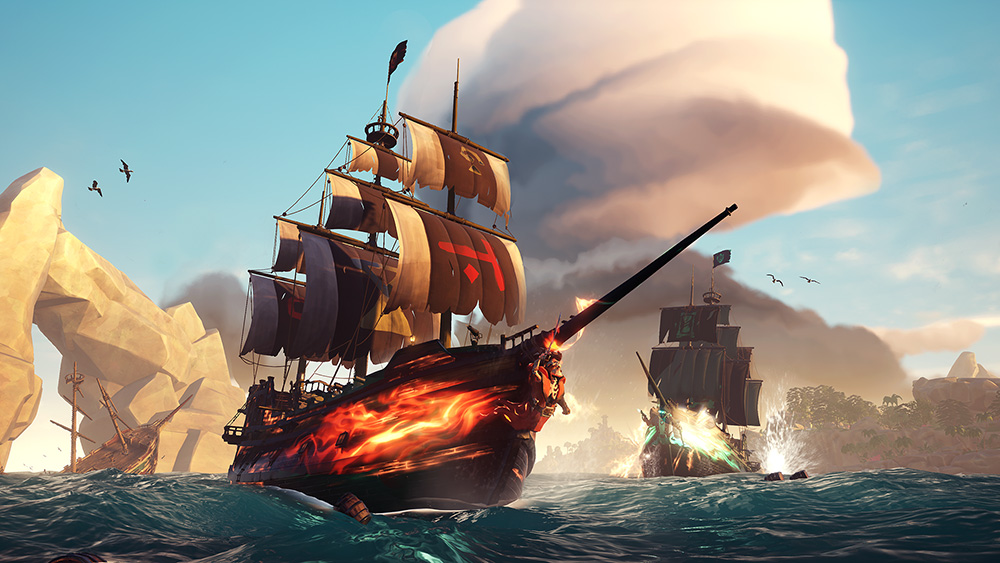 The Spoils of War

Should you really want to raise the stakes, go boldly into battle with as much treasure aboard your ship as possible to amplify your Allegiance-earning potential. Staying afloat is also good news for your Hourglass of Fate: with every win, your Hourglass will increase in value. When you vote to leave the Battle for the Sea of Thieves, you can cash in your Hourglass at any Outpost or The Reaper’s Hideout, depending on your Faction – but if you get sunk first, all that stored value will be lost to the waves!

As you win battles and unlock rewards, your Allegiance will continue to rise. Eventually you’ll earn serious perks including access to previously unexplored areas of each Faction’s hideout. Ever wondered what (and who) lurks beneath The Reaper’s Hideout? You might just get a chance to find out...

Raising your Allegiance will also grant you access to unique Curses from each Faction, which are a lot more enticing than they sound. Players siding with the Guardians of Fortune can earn the Legendary Blessing of Athena’s Fortune which allows them to embrace the Ghostly Curse, while Servants of the Flame can be at one with their inner skelly by unlocking the Skeleton Curse (and then pay a visit to the Bonesmith to customise their new look).

Emissaries and Captains won’t miss out on the fun either. If you’re already an Emissary for Athena’s Fortune or The Reaper’s Bones, siding with the corresponding Faction to sink ships of the opposing Faction will net all the usual rewards and boost your Emissary Grade, company reputation and Ledger position. For Captains, Season Eight introduces two new Milestone Alignments in the Ship’s Log: The Guardian and The Servant. Representing the relevant Factions to progress through these Milestones will unlock new Trinkets and customisation options. 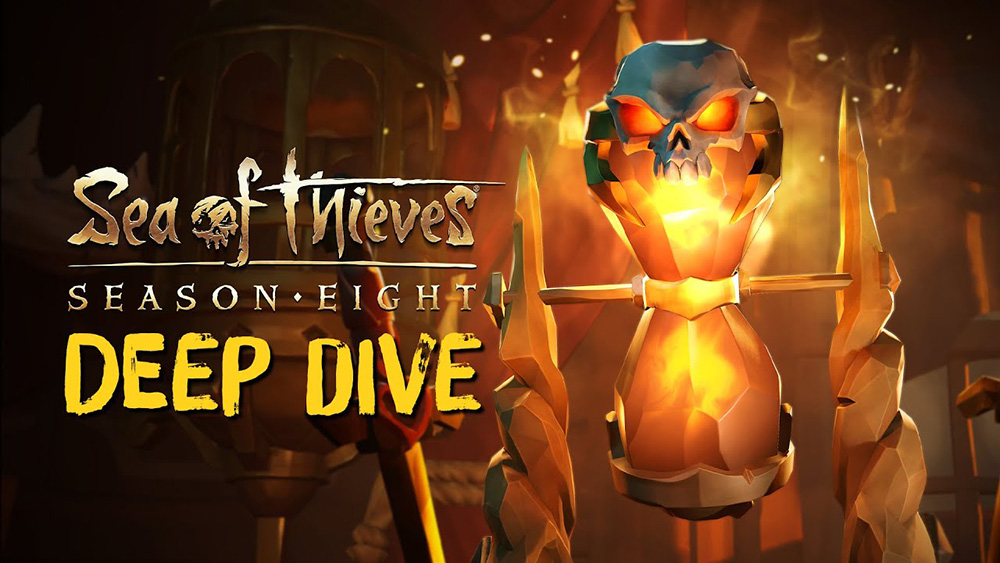 No update is complete without new Pirate Emporium treasures, and this one is no exception! First up is the opulent King’s Ransom Ship Collection based on the kind of wildly wealthy royalty found only in fables, letting players deck out their vessels in glorious gold and maybe accentuate the look with a King’s Ransom Crown. And as the Night Wulf Ship Collection is a perennial favourite, its influence expands this month with the Night Wulf Costume and Weapon Bundle!

Not to be left out, new Plunder Pass purchasers are in for a treat this Season with not only the full Ravenwood Ship Collection (including Collector’s Figurehead and Sails) added to the pool of Seasonal rewards, but also the evolving Ravenwood Costume that changes as you raise your Renown and progress through the Season.

For any deal hunters out there, good news! The Black Friday Sale is set to run from November 24th–29th, delivering discounts on classic cosmetics from Sea of Thieves: A Pirate’s Life and other iconic sets, alongside a fleeting restock of the rare Golden Skull Sails. And don’t miss out on the free Confident Captain Emote while you’re browsing! 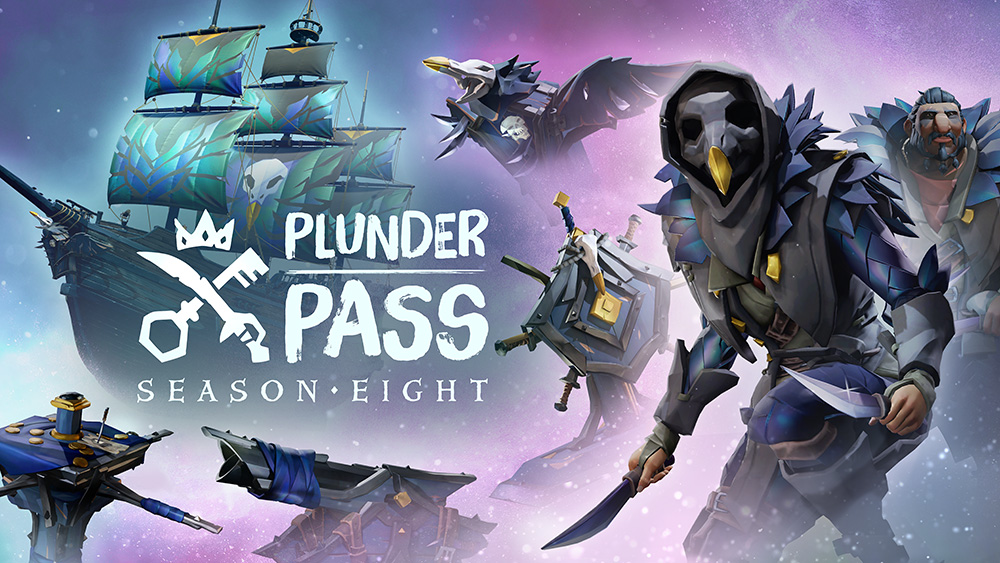 New to Sea of Thieves? Find out about the latest free content updates on our What’s New page page, get familiar with Who’s Who or pick up some gameplay tips from our Pirate Academy, which provides invaluable information on topics ranging from sailing to swordplay as you prepare for your maiden voyage. Learn more about Sea of Thieves here, or join the ongoing adventure at www.seaofthieves.com where you can embark on an epic journey with one of gaming’s most welcoming communities!