Travel to distant lands and explore deserts islands, barren lands, and snowy landscapes on your quest for survival
Assemble Entertainment
July 22, 2022
[This unedited press release is made available courtesy of Game Developer and its partnership with notable game PR-related resource Games Press]

Wiesbaden, Germany - 22nd July 2022. Survivors of a destroyed world become denizens of a newly blossoming civilization in Endzone - A World Apart. Today, prepare to discover even more as the world of Endzone broadens further with its newest content-packed DLC titled, “Distant Places,” arriving on PlayStation 5 and Xbox Series X|S Brought to us by award-winning publisher Assemble Entertainment and developer Gentlymad Studios, the Distant Places DLC brings even more depth to the game by expanding beyond its original borders. Enjoying over 5,500 positive reviews on Steam, Endzone - A World Apart is Assemble Entertainment’s most successful game to date. 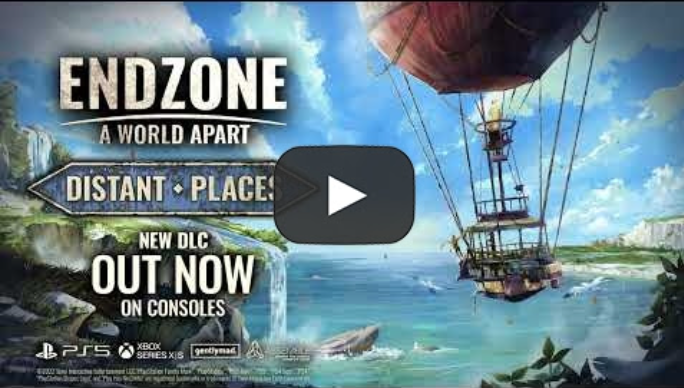 In the spirit of other survivor city-builders like Banished, Frostpunk, and Surviving the Aftermath, Endzone puts players in charge of rebuilding society after civilization’s complete collapse. Endzone differentiates itself by setting the scene after a nuclear holocaust, featuring mechanics such as complex weather of sandstorms and nuclear rain, as well as human threats such as crusaders, aggressive roaming hoards of resource-greedy warriors. Colony denizens face realistic and frighteningly prescient crises like radioactive soil, scarce clean water supplies, and tumultuous and deadly storms.

The Distant Places DLC introduces a breadth of highly requested features, such as brand new territories to discover and explore via the newly implemented Hot Air Balloon. Featuring 12 narrative-driven expeditions, exotic new foods and resources to discover, and new building blueprints to expand the variety of construction, Distant Places is suited for only the braves and most well-equipped adventurers. Board the balloon and set sights for beyond the horizon, discovering the Distant Places far, far away that so many legends speak of!

Endzone - A World Apart: Distant Places is now available on PlayStation 5 and Xbox Series X|S for £6.49 GBP / €7.99 EUR. The title is also available via Steam and GOG for Windows PC for £6.49 GBP / €7.99 EUR. In keeping with the game’s theme, Endzone - A World Apart is available as one of Assemble’s “Save the World” editions, which comes with extra goodies like the official soundtrack. Additionally, PlayStation Plus subscribers can grab Distant Places for a reduced price thanks to a 20% launch discount.