The Divnich Tapes: Why Do 'Bad' Wii Games Sell So Well?

Why do poorly reviewed Wii games continue to sell in such big numbers? Concluding this month's Gamasutra-exclusive NPD analysis, Jesse Divnich analyzes the atypical purchasing habits of casual Wii gamers and their propensity to buy games based on factors
Jesse Divnich
Blogger
April 24, 2008
[Throughout this week, ex-simExchange analyst Jesse Divnich is presenting exclusive Gamasutra analysis of March's hardware and software trends, using data from The simExchange, NPD, IGN GamerMetrics and GameTrailers. Our final installment studies the casual Wii gamer basing purchases on brand awareness, simplicity, and other factors instead of quality review scores. Previously in this series: Grand Theft Auto's Xbox 360 to PlayStation 3 sales ratio, the end of FPS sales cannibalization, and April predictions for Mario Kart Wii and GTA IV.] It's no big industry secret that there is some strong correlation between game quality and sales, and the table below reinforces that assumption for next-gen games with only one exception -- the Nintendo Wii. Going in-depth as to why there's a strong correlation between sales and quality with the PS3 and the Xbox 360 would mostly be stating the obvious. The interesting story lies behind the Wii’s success and why 'quality' scores -— in some cases —- are generally insignificant to Wii consumers. The following graph shows a game's revenue compared to its average review score, and you can clearly see the Wii's exception to the rule:

[Data is taken through the end of 2007 and provided by EEDAR, Metacritic, and NPD. Each system’s percentage average is based on its own average revenue per game.] Currently, the Wii has the largest installed base among the next-gen systems. Although it is generally the hardcore gaming market that drives hardware sales in a console's first year, the Wii has a different story behind it. Because of its simple design, variety of casual games, and low price point, the Nintendo Wii has become the system of choice for casual gamers, social gamers, and the sub-13-year-old gaming market. Here's a graphical look (with the second graph showing detail) at the same data of revenue compared to Metacritic score: 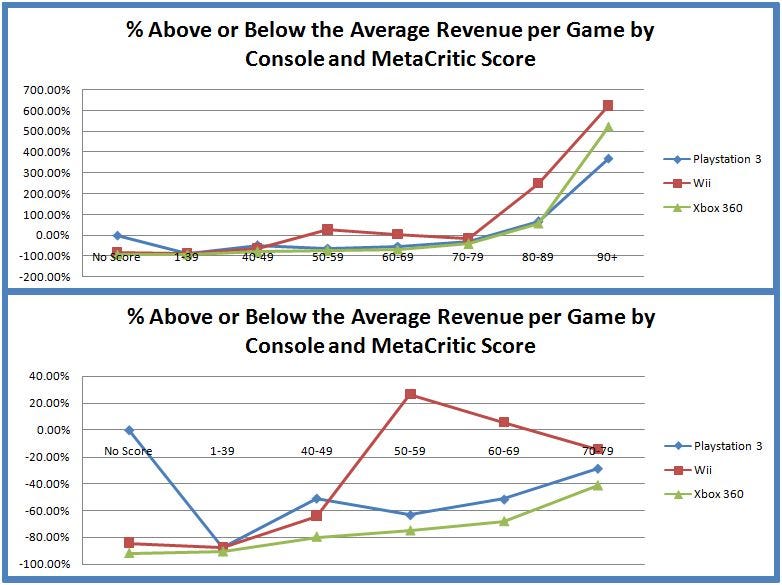 However, due to this large influx of new gamers to the market, these consumers rely less on quality scores and rely much more on word of mouth, brand awareness, marketing, and simplicity when making a decision on which games to buy. One could propose a theory that these marketing and design attributes have a stronger correlation to sales than quality scores. This theory, if true, would shed some light on the success behind games like: Wii Play, Guitar Hero III, Carnival Games, and Mario & Sonic at the Olympic Games. Mario & Sonic at the Olympics Games, which did 613,000 units in December 2007, is an excellent example of how brand awareness plays a role in Wii sales. To the casual and social gamer, it didn’t matter that the game received sub-70 Metacritic scores. What did matter was the fact that it had two recognizable brand names, “Mario” and “Sonic”, performing a recognizable action, “The Olympic Games.” Yes, it may seem too straightforward that one of the many secrets to the Wii lies in recognizable brand names and actions, but the sales don’t lie. Carnival Games, which is pulling in 100k+ units a month, is a good example - as it relies less on marketing or brand awareness and more on the other key selling points, such as price and gameplay simplicity. Consumers shopping at Wal-Mart see the box art and likely say to themselves, “It’s cheap, the game structure is familiar (playing carnival games), and it is probably easy to pick up and play.” On that same token, that same consumer sees No More Heroes or Okami and says, “The title is not familiar, the game looks complicated, and I don’t know what an Okami is.” Does this imply that publishers and developers should be “dumbing” down their games to appeal to the mass audience? Of course not, but understand that like any new consumer base, there's an initial learning curve before they are more discerning about how they spend their money on games. In fact, looking at third-party website traffic data from Alexa, we can see a small increase in “internet reach” with some of the bigger websites that offer quality scores. (Note: I've charted the two biggest gaming websites that offer “reviews,” according to Alexa). 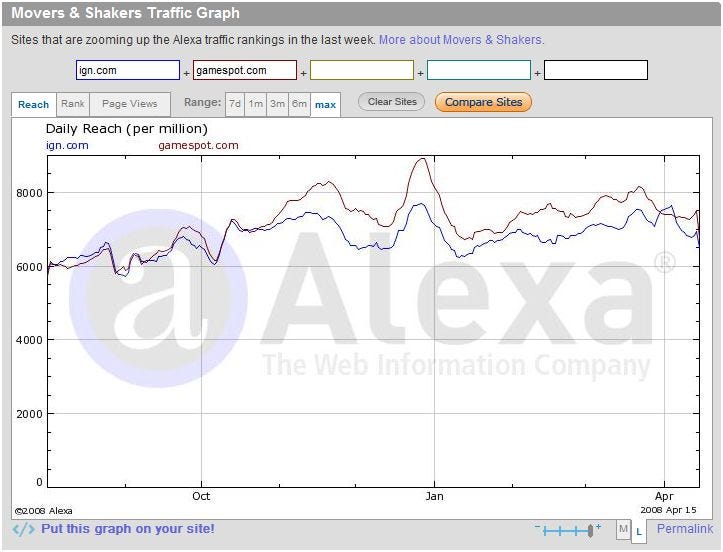 Over the last six months, the 10 percent increase doesn’t look like much (third-party tracking service Compete.com has similar stats for those sites), but in terms of internet growth among established websites, this is significant. This could potentially be evidence that this influx of new gamers into our industry are slowly educating themselves. Perhaps, the next time they are at Wal-Mart or any other retailer, they'll be more perceptive with their game purchases. Or perhaps the games they are buying with lower Metacritic scores are fulfilling their gaming objectives, regardless of score. This is a subject we will likely revisit in six months to see if the window of opportunity for games in the 50-to-70 Metacritic score range has evaporated, or if there still exists a group of gamers who are not interested in critical reception - much as is the case in the movie industry. It will be also interesting to view Alexa data on specialty websites such as GameFAQs.com, six months or a year from now to see if the casual consumer of today is converting into the hardcore gamer of tomorrow. [NOTE: "This month's Divnich Tapes were prepared during my ending term as the Analyst at the SimExchange. Next month, I look forward to a new format and expanded analytics with the utilization of the extensive data available to me as the new Director of Analytical Services at Electronic Entertainment Design and Research (EEDAR). The following is the views and opinions of one person and not of EEDAR, The simExchange, GamerMetrics, or Gametrailers."-- Jesse Divnich.]
Console
Get daily news, dev blogs, and stories from Game Developer straight to your inbox
Subscribe