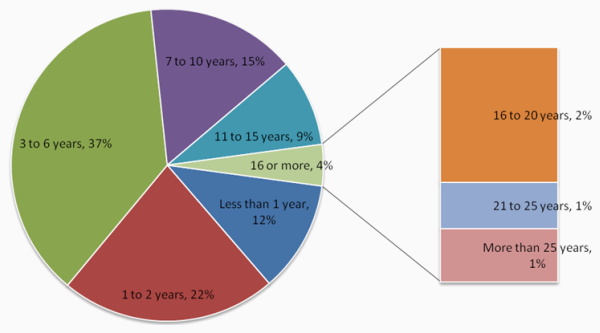 There was another notable age-related trend that surfaced with this year's study, however: Older game industry employees continued to get more valuable. In the past, salaries peaked with 41- to 50-year-old developers, then fell again with older employees. But this year, salaries correlated more strongly with age, and developers over 50 had the highest average salary: $105,948. So, as employers likely looked to hire more younger employees, who take lower salaries and are burned out less easily, the older employees who did remain saw a particularly pronounced premium for their experience, relative to the industry as a whole. These age trends may contribute to developers reporting that they remain happy with the industry despite the industry's recent troubles: Many of those more experienced employees who have more bones to pick may not be sticking around to express their dissatisfaction. The sample for the data contained in this excerpt was a group of 2,623 game developers across all disciplines and demographics. Game Developer Research, a sister company to Gamasutra, recently published top-level highlights from the salary study, including news of an overall 4 percent drop in mainstream game industry salaries to $75,573. Since then, it has publicly released earnings data on indie developers and contractors as well as developer opinions on the state of the industry. The full Game Developer Salary Survey 2005-2010 is now available for purchase from the official Game Developer Research site.
Console
Get daily news, dev blogs, and stories from Game Developer straight to your inbox
Subscribe