Following Electronic Arts' announcement of Wing Commander Arena for Xbox Live Arcade, Gamasutra caught up with lead designer Sean Penney at EA's Redwood Shores campus to disc
Alex Handy
Blogger
February 23, 2007
The Kilrathi are coming to Xbox Live Arcade, with Electronic Arts' latest news that it will be bringing Wing Commander Arena to Microsoft's digitally downloadable gaming marketplace. The title will offer 16-player online combat, in addition to single player battle modes, when it launches this summer - Gamasutra sat down to talk about the game in detail with lead designer Sean Penney, as well as play the game at EA's Redwood Shores campus. Before you grab your flight suit and hop into your Arrow, there's something of a catch. This is not a traditional Wing Commander game. First of all, the combat arenas, while rendered in 3D, are decidedly 2D in nature. Movement is confined to one plane, and players will pilot from a 3rd person view of their craft. While initially underwhelming in appearance, the game is certainly something unique in the Xbox Arcade space, and vaguely resembles the open source Unix game, XPilot. 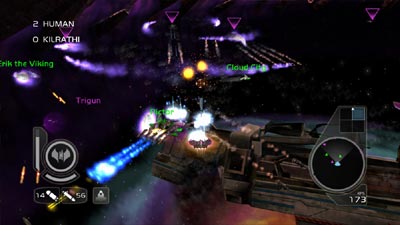 Sean Penney is an associate producer at Electronic Arts, and he's performing the duties of lead designer on Wing Commander Arena. While he's stationed in Burnaby, British Columbia, the development team is down in New York City. That eight-person team is known as Gaia Industries, and has previously worked on mobile phone games, such as Sex in the City: Virtual Voodoo, as well as another forthcoming Xbox Live Arcade title, Street Trace NYC, a hover-board combat game, though that title is not being published by EA. Penney has previously worked on some of EA's FIFA, SSX, and NBA Street titles. Said Penney, "People talk about Nintendo being innovative with the Wii controller. They ask, 'What's Microsoft's innovation?' Well, I think that their innovation is Xbox Live." The EA designer said that Wing Commander Arena has been in development for eight months. At the beginning, he said, EA was shopping the license around to a number of smaller third party shops. "You know EA, though," he added, "they're very cautious." Despite the strict size limits on the game (Xbox Live Arcade games are limited to 50 MBs in size), Penney was confident that the title would not have trouble getting in under the threshold. He intimated that a size limit increase is forthcoming from Microsoft, though Microsoft could not confirm this news. "If we'd known about the size increase, maybe we could have gotten some Mark Hamill cut scenes in there," joked Penney. All kidding aside, this arcade space combat game does boast some firsts for the Wing Commander series. It'll be the first time players will get the chance to play as the furry and deadly Kilrathi race, in the series' first multiplayer mode since 1994's Wing Commander: Armada. Players can choose from six ships, three each for the Terrans and Kilrathi. Each ship comes in three different configurations, but essentially fall into the roles of scouts, fighters, and bombers. Gameplay styles range from straight free-for-all battles to control point battles and carrier defense scenarios. As for development process, Penney was extremely complimentary of the Xbox Live system, saying that coding has gone smoothly, and that he feels EA's deep pockets will afford the company time to polish its offerings in a way that is not common on the service today. Penney concluded by suggesting that EA intends to differentiate itself on the service through the quality of its titles and the patience demonstrated in its development cycles - something it is also striving for in the recently announced, Bizarre Creations-developed Boom Boom Rocket, shown alongside Wing Commander Arena.
Console
Get daily news, dev blogs, and stories from Game Developer straight to your inbox
Subscribe