According to NPD's US retail bestsellers for December, 13 of the top 20 titles were made for Nintendo's Wii or DS, with Scribblenauts and Zelda: Spirit Tracks just below the top 10.
Kris Graft
Publisher
January 15, 2010
Nintendo platforms had a commanding presence on NPD Group's U.S. retail top 20 video game software sales chart for December, made available to Gamasutra this morning. Seven of the top 20 games were available on Nintendo Wii, while six were for Nintendo DS, for a total of 13 Nintendo platform games on the list. Four Xbox 360 games and three PlayStation 3 games made the list. Nintendo was the publisher with the most titles to break into the top 20, leading the way with nine games. Ubisoft and Electronic Arts followed with three, and Sega and Activision Blizzard with two each. According to Wedbush Morgan's Michael Pachter, 114 titles sold over 100,000 units in December 2009, so all games in December's top 20 sold significantly more than 100,000 units -- although NPD Group only provided exact sales figures for the top 10. Outside of the already-revealed Top 10, a number of titles fared well without making the initial list. In particular, Nintendo's The Legend Of Zelda: Spirit Tracks and New Super Mario Bros. for DS were Number 11 and Number 12 respectively, with Mario & Sonic's Winter Olympics game for DS and Wii taking up the next two spots. Further down the chart, other third-party DS and Wii titles, including Warner Bros' Scribblenauts for DS and Ubisoft's Just Dance for Wii battled it out with console versions of Madden NFL and the PS3 version of Assassin's Creed II, among others. Nintendo's strong presence in the December top 20 can also be partly attributed to the continuing popularity of its rotund mascot -- seven of the games on the chart have "Mario" in the title. Below are the top 20 charts, as provided by NPD Group: 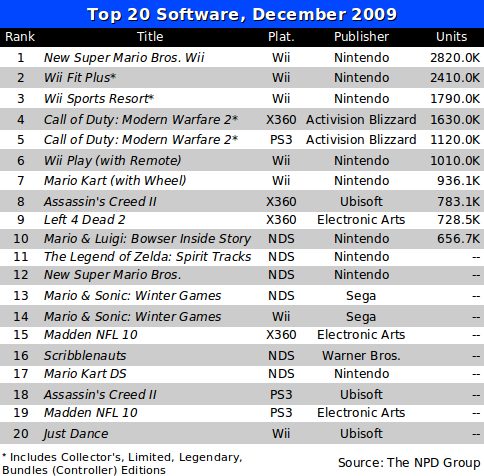