A day after publishing its latest report of American retail video game sales, the NPD Group released an extended top 20 software chart revealing strong sales for three additional Ni
Matt Matthews
Blogger
October 20, 2009
A day after publishing its latest report of American retail video game sales, the NPD Group released an extended top 20 software chart revealing strong sales for three additional Nintendo DS games, including the critical hit, Scribblenauts. The top 10 list, revealed in yesterday's data, was dominated by Microsoft's Halo 3: ODST and Nintendo's Wii Sports Resort. Two versions of The Beatles: Rock Band and one version of Guitar Hero 5 also ranked in yesterday's chart, showing a return to prominence of music game titles. Only one Nintendo DS title, Mario & Luigi: Bowser's Inside Story, appeared in the top 10. Below number 10, however, three more Nintendo DS titles sold well enough to chart. Coming it at 12th was Kingdom Hearts 358/2 Days, the latest entry in the collaboration between Square-Enix and Disney. The word-to-reality puzzle game, Scribblenauts from Warner Bros. Interactive Entertainment and developer 5th Cell, came in just below Kingdom Hearts with sales of 194,000 (according to NPD Group data reported by IGN). The final Nintendo DS title, Nintendo's Professor Layton and the Diabolical Box appeared at 18th, dropping from 16th on last month's top 20 list. In previous months the strongest Nintendo DS titles have all been published by Nintendo, with Mario Kart DS and New Super Mario Bros. frequently appearing in the top 20. Neither of those Nintendo mainstays charted in September 2009 while two third-party titles sold nearly 200,000 units. It is particularly notable that Scribblenauts, a completely new and untested property, launched so well. The Xbox 360 was the dominant platform on September's chart with eight titles, including seven from third parties like Electronic Arts, Activision Blizzard, MTV Games, and Square Enix. For the first time the PlayStation 3 was the second most prominent platform with five titles. With the exception of Batman: Arkham Asylum, each of those PS3 titles also appeared as an Xbox 360 title further up the list. The Nintendo Wii had only three titles in the top 20, down from seven titles in both July and August of this year. Electronic Arts was the most represented publisher on September's chart with five titles, all of them sports and racing franchise titles. EA also distributed the three Beatles games published by MTV Games. Nintendo was the second most successful publisher according to this chart with four titles. Notably missing from the chart were the three other versions of Activision Blizzard's Guitar Hero 5. While the Xbox 360 version did make it into the top 10, the Wii, PlayStation 3, and PlayStation 2 editions did not individually chart. Given that The Beatles: Rock Band for the PlayStation 3 took 20th on the list with sales of 132,400 units, each of the other versions of Guitar Hero 5 must have sold below that level. Below are the top 20 games in the U.S. for September 2009, as provided by NPD Group: 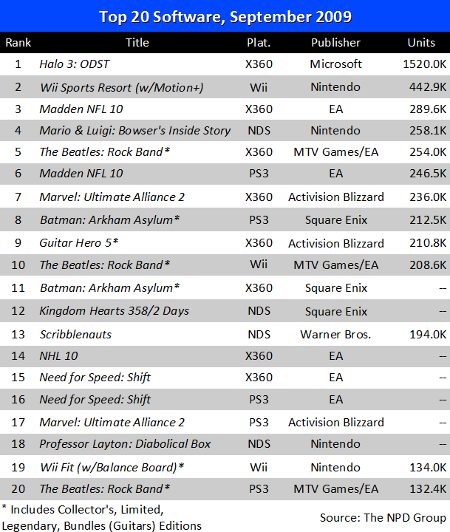