NPD For June 2007: The Gamasutra Analysis

Gamasutra presents its latest exclusive in-depth analysis of NPD's latest U.S. console and game sales for June 2007, looking behind the numbers at an industry in transition, showing
Matt Matthews
Blogger
July 24, 2007
If you follow the NPD reports at all, you'll have noticed that the numbers change from month to month but the essential features stay the same. For the last six months the PlayStation 3 has lagged, the Xbox 360 fallen short of expectations, the ancient PlayStation 2 slogged on, and the Wii played second fiddle only to the Nintendo DS. Superficially, the picture really does seem that simple each month. However weekly, monthly, and annual data reveal some interesting trends that the simple summary can't provide. Let's begin with a look back to 2005 and the growth of the industry. Industry Sales Sales during the first half of 2007 reached $6.1 billion, up nearly 50% over the same period in 2005, according to NPD figures. 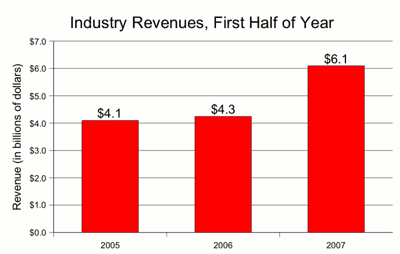 This is the picture of an industry in transition. During the first half of 2005 the only new system on the market was the Nintendo DS. At that point it sold well, but wasn't the hardware and software powerhouse we've seen since June 2006. A year later for the first half of 2006, the Nintendo DS continued to move software and the new Xbox 360 was pushing its more expensive games onto the market, driving revenues modestly higher. Then during the first half of 2007, the market exploded with more robust software sales on the Xbox 360 and more growth from Nintendo's Wii and retooled Nintendo DS Lite. The result was the tremendous jump you can see in the graph above. Comparable growth can be seen in the monthly June sales from each year since 2005, culminating in June 2007 with $1.1 billion in sales. 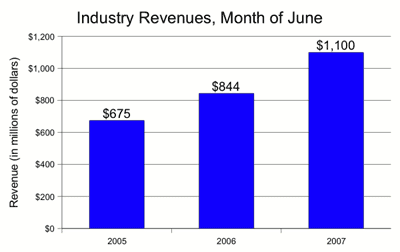 About those June 2007 sales, consider this interesting fact: the monthly sales of the Nintendo Wii console, Nintendo DS handheld, and the five Nintendo-published games in the Top 10 chart accounted for over 21% of the whole $1.1 billion of sales for the entire industry in June. That means that just Nintendo's hardware sales and five of its games alone generated around $230 million dollars in revenue. Hardware The period from 2005 to the present represents a transition for the industry, from the previous generation of systems to the very newest. We can see this transition reflected in console hardware revenues during the month of June from each year: 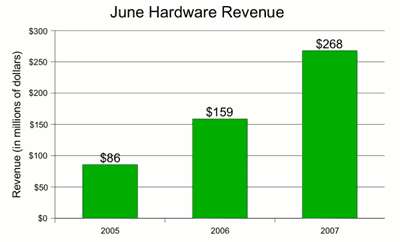 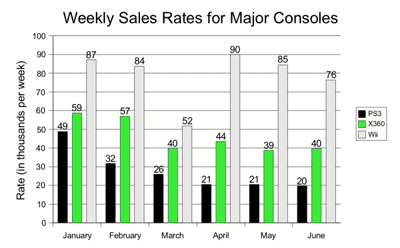 As this graph shows, Nintendo's Wii had a very weak March but rallied in April when it sold around 90,000 consoles per week. From that peak Wii sales dropped 6% from April to May and then almost 10% from May to June. Sales of the Xbox 360 improved modestly in June, up to 40,000 per week from around 39,000 per week in May. While it is tempting to compare to the Wii, the current market leader, it is instructive to compare Xbox 360 sales to those of the PlayStation 2. You may recall that both the Xbox 360 and PlayStation 2 had a one year headstart over competing systems in their respective generations (disregarding, for the sake of this comparison, the Sega Dreamcast). From 1 January 2002 to 30 June 2002, Sony sold 2.48 million PlayStation 2 consoles, for a rate of around 95,000 systems per week. For the comparable period this year, Microsoft has sold 1.25 million Xbox 360 systems at a rate of around 46,000 per week. In brief: the PlayStation 2 was selling almost twice as well at this point in its lifetime. So while the Xbox 360 will likely fare better than its predecessor, the original Xbox, sales will have to turn around dramatically if Microsoft hopes to reach the same level of sales that Sony did with the PlayStation 2. Sony's PlayStation 3 continues to struggle. Despite what appears to be a monthly sales increase -- from 82,000 in May to nearly 99,000 in June -- the weekly sales rate actually dropped from 21,000 per week to 20,000 per week. Compared to the PlayStation 2, which averaged 80,000 system sales per week in its first eight months on the market, Sony executives must cringe at the dismal 44,000 PlayStation 3 systems they've averaged each week since November 2006. Sony claims that PS3 sales have increased substantially since it announced its new price strategy a couple of weeks ago. The effects of Sony's changes will be reflected in July's numbers, but there is a lot of ground to be made up. Even if Sony doubled its weekly rate it would have only put itself in the same class as Microsoft's Xbox 360 and still far behind Nintendo's Wii. On the handheld front, the Nintendo DS is still selling well, moving over 100,000 systems per week as it has every month since January when Nintendo had trouble supplying the market after the Holiday 2006 rush. Sony's PlayStation Portable has sold better each month since March 2007. Since the price drop of the system in May 2007, weekly sales are up 38%, and during June the PSP sold around 58,000 systems per week, the PSP's best non-Holiday month since its March 2005 launch. 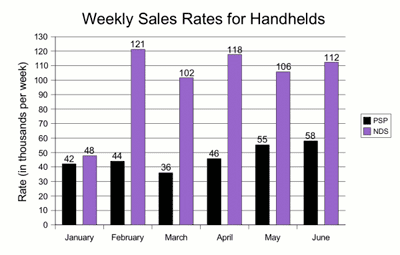 Software The dual success of Nintendo's DS and Wii platforms is quickly beginning to pay dividends in software sales. Nintendo itself published eight of the top 20 games during June 2007. For the first time a third-party Wii title has placed in the top 10, the Wiimote-enhanced Resident Evil 4 from Capcom which ranked #9 on NPD's chart and moved more than 150,000 copies. More impressively, Nintendo claimed spots #1 through #4 with Mario Party 8, Wii Play, Pokemon Diamond, and Pokemon Pearl. In records running back to June 2004, EA is the only publisher who comes close to Nintendo's feat: in February 2006 four EA Sports titles took spots #2 through #5. (For the curious, the coffee-less version of Grand Theft Auto: San Andreas took #1 that month.) June was a good month for Microsoft's Xbox 360. Forza Motorsport 2, which debuted at #6 in May, moved up a spot to #5 and close to sales of half a million copies. Whereas the Wii has proven an excellent platform for Nintendo's properties, the Xbox 360 hosts a wide array of third party titles. Guitar Hero 2 from Activision and The Darkness from 2K Games both ranked in the top 10 while Transformers: The Game (Atari) and DiRT (Codemasters) placed in the bottom half of the top 20. Sony's hardware did manage one game in the top 10 -- Activision's Guitar Hero 2 -- and four in the top 20, but all were for the aging PlayStation 2. Not a single PSP or PS3 game sold well enough to make the charts. That said, the biggest releases on Sony's newer platforms all came in the last two weeks of the period. Looking Forward When the July 2007 numbers are reported, we can look forward to a few key questions: Did the new pricing strategy pay off for Sony? If it rises to 40,000 systems per week, then Sony will be on its way to repairing its image. However, that progress will have to continue into Fall 2007 for Sony to remain competitive. News that Microsoft had extended the Xbox 360 warranty can cut two ways. Consumers could be emboldened with Microsoft's strong stand behind its product, or consumers might worry that the systems still on the market are in some way deficient even if they can be fixed. Will Xbox 360 sales change in response to the news, and by how much? The Wii has seen weekly sales rate drops for a couple of months. If this continues in July, will it mean that consumer demand for the new system is finally cooling?