Battletech and Shadowrun co-creator Jordan Weisman has been talking to Gamasutra about the first internal product from new firm Smith & Tinker -- an online, free-to-play monster battling game called Nanovor with major toy tie-ins.
Christian Nutt
Blogger
August 03, 2009
Jordan Weisman, founder of FASA and WizKids, has revealed the primary project of his new company, Smith & Tinker -- it's an online, free-to-play monster battling game called Nanovor. Following an earlier interview with Weisman, the Battletech and Shadowrun co-creator, the executive and other Smith & Tinker execs discussed the product and overarching project in depth with Gamasutra. The meeting, which took place at Gamasutra's offices, also included Smith & Tinker president Joe Lawndus and Charles S. Merrin, its senior vice president of marketing. Lawndus' background takes in Cranium and Hasbro -- he's the toy guy -- while Merrin has worked in the online gaming and web space for some years, including RealArcade -- he's the online guy. Add in the game guy, Weisman, and you get the recipe for the company's new major product, Nanovor. (The company is also partnering with Piranha Games for an Unreal Engine-powered reboot of the MechWarrior franchise for PC and Xbox 360.) The Basics of Nanovor Nanovor is a muilti-pronged strategy battle game property primarily targeted at boys in the seven-to-twelve age range, which encompasses a free-to-play online game, toys, web animation, and even dedicated electronic handhelds known as Nanoscopes -- allowing for offline play. The world of Nanovor revolves around microscopic insects which live in computer chips -- which live to do battle with each other. The bugs were discovered by a high school student named Lucas Nelson -- who stars in the Nanovor animated web shorts, which are designed to tell the backstory to kids and potentially even go viral. Of course, fiction aside, kids can build armies of the virtual bugs and do battle in the online free-to-play game, which requires a PC client download (or install from a disc) and which allows for booster pack downloads (there's the microtransaction core of the business.) 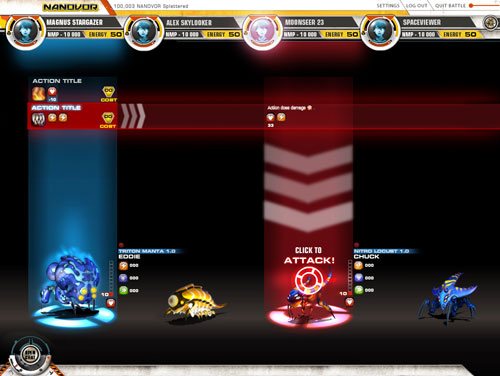 The philosophy behind the property seems based on three core concepts, per our discussions with the executive team: one, to capitalize on addictive Pokemon-style gameplay but with a harder edge to appeal more to boys; two, to take advantage of the online free-to-play market to launch a game with the mechanics of a trading card game but with more attractive pricing; and three, to get kids playing together in the real world with the Nanoscope devices, which allow for two to four player battles with players' customized decks of creatures, synchronized with their online accounts. The Nanoscope will launch to retail this October for $49.99. It will contain built-in minigames to allow players to level up their Nanovor creatures while off the PC. Players will also be able to enjoy single player-focused battle challenges, some of which will be sold on separate cartridges, for less than $10 each. 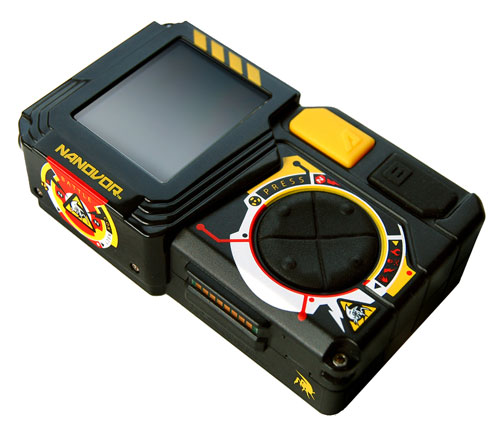