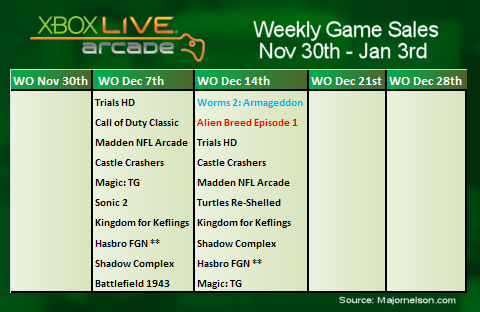 Duty Calls The first release for the month of December was Activision's Call Of Duty Classic, a port of the PC original to coincide with the release of Call of Duty: Modern Warfare 2. The game was given away in vast quantities with the Hardened Edition of Modern Warfare 2, so it's a little difficult to calculate overall sales from leaderboards. We do know it hit the second spot of the top 10 list in its second week, but completely dropped off by the third. QIX For Kicks Taito’s simplistic remake of QIX for Xbox Live Arcade was the second new release. Despite no official word on the game until its release week, it performed solidly initially -- but sales have since dropped off quite significantly, and as of December it only had 5,413 players on the leaderboards. 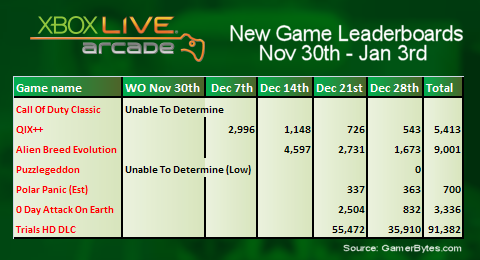 Alien Armageddon Team 17’s expensive revival of its cult classic Alien Breed franchise was a big risk for the Yorkshire developer –- an episodic action game that supposedly will cost around $2.5 million in the long run. Unfortunately, it does not appear to have paid off. For its first week, the game had only 4,597 players on its leaderboards, and 9,001 by the end of the month. In fact, the developer's own Worms 2: Armageddon, which was reduced in price for a single day during the same week, ended up selling more in total over the same period. The problem for Team 17 is how the studio intends to continue on with the series, or if it will at all. The second and third episodes can probably only sell as well as the original episode -- with a high chance of selling less. Telltale has learned this the hard way with their Wallace & Gromit series. Tecmo's Puzzlegeddon was also released the same week, but like a lot of other puzzle games, it seemed to have been dismissed entirely. The game does not have leaderboards that we can follow, but it also did not hit the top 10 for its opening week. Attack On Polar Bears The final two releases of 2009 were Square Enix’s 0 Day Attack on Earth for $15 and Eiconic Games' Polar Panic for $10. As there were no new releases the week after, these games both got two weeks in the top spot. Despite this, neither did very well. 0 Day Attack On Earth was the better selling of the two with 2,504 players in its first week, but it dropped to 832 in the second for a total of 3,336 players in December. Polar Panic only mustered around 700 players total between the easy and normal modes for the first chapter. Polar Panic got pretty decent reviews, but it seems the premise itself wasn't enticing to players. Eiconic's promotion of the game wasn’t particularly good either. While it has a good official website and several trailers, major websites like Joystiq and Kotaku didn't actually mention the game prior to release. It can be difficult to know whether you can get coverage on the big sites, but sometimes you need to throw a game under people's noses before they can react to it. 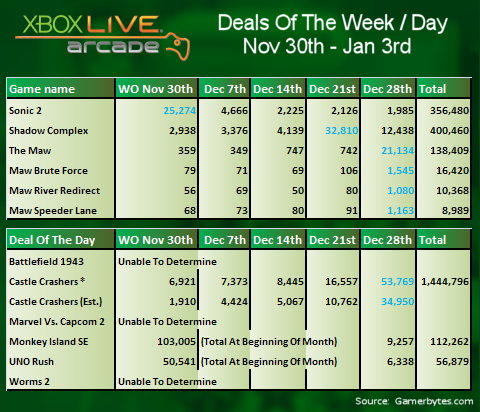 Deals Of The Week – A Platformer Trifecta There were plenty of deals in December. Three regular titles were discounted for a week each, and Microsoft held a "12 Days Of Christmas" calendar special, during which one piece of online content would be on sale for a single day. The first deal was Sonic 2, which was brought down from $5 to $3. This is the first time a $5 game has been put on sale since the promotion first began, and it added over 25,000 new players that week alone. Shadow Complex went down from $15 to $10 and saw a large boost in sales from its regular 3,000 a week to 32,000 in that week. With both games, sales remained elevated even after the promotion ended -- a trend Valve has frequently pointed out following its Steam sales. Sonic 2 even made it into the top 10 the week after it was on sale. Twisted Pixel’s The Maw had a week-long promotion, adding over 21,000 players to its leaderboards -- far more than the 300 to 400 a week it had been getting. Many players also picked up the extra stages alongside it, with those levels increasing their sales rate tenfold. Deals Of The Day Due to difficulties in tracking specific stats from a lot of the Deals Of The Day, we were unable to get exact statistics in all cases. Neither Battlefield 1943 nor Marvel Vs. Capcom 2 had leaderboards we can follow, and there was no top 10 for the corresponding weeks. Let's just assume both did very well. Worms 2: Armageddon was the first sale from the list, and while we don’t have leaderboard statistics, we do know it was the best selling game of that week thanks to the sale. Based on last month’s charts, UNO Rush was adding roughly 1,500 players a month, while The Secret of Monkey Island: Special Edition was adding over 4,000. UNO Rush claimed an extra 6,338 players in December while Monkey Island scored 9,257 players, so the sales certainly helped both of them. Castle Crashers, being the phenomenon it already was, soared to over 53,000 new players during this week, thanks to its half-price day.

Expansion Packs Boast Big Numbers December was surprisingly a big month for downloadable content. Trials HD released its first DLC expansion pack, while the hit Kingdom For Keflings finally got some new maps for its users to play with. The Peggle Nights DLC for PopCap's original game continues to be very strong alongside its main game. Some weeks, it has sold more than Peggle itself. It managed to double its November sales, with an extra 21,912 players in December, meaning the Peggle DLC has now sold to 14 percent of the Peggle userbase. While we don’t have specific leaderboards for the Keflings downloadable content, we can see that following the DLC release on November 9th the game saw the sales of the main game double throughout December. With the new exposure, coupled with Christmas, it has done well for developer NinjaBee. The Trials HD DLC, much like the base game itself, has far exceeded expectations. 91,382 people have played the first extra course from the Trials HD "Big Pack," an astonishing number. Just like with Peggle, that represents 14 percent of the userbase of Trials HD owners. 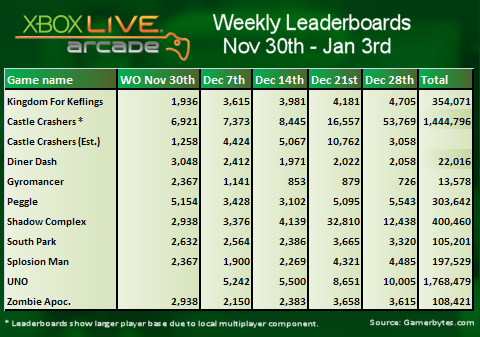 Weekly Leaderboards: The Christmas Boost Outside of new releases, we also look at a select few titles and their leaderboards each week. We usually do this to decipher data from the top 10 lists, but due to a lack of availability, we're unable to use the data effectively. Instead, we're examining something a little different: the Christmas boost. For the majority of the games we follow, the weeks of December 21 and 28 showed a dramatic increase in new players. Peggle gained 2,000 new players each week, and Castle Crashers doubled its weekly player base, as did 'Splosion Man and UNO. Games that didn't do quite so well were mostly new releases -– Gyromancer and Diner Dash specifically. Those games are going through the traditional post-launch sales decline. The expanded player base likely made them drop less than they would have otherwise. 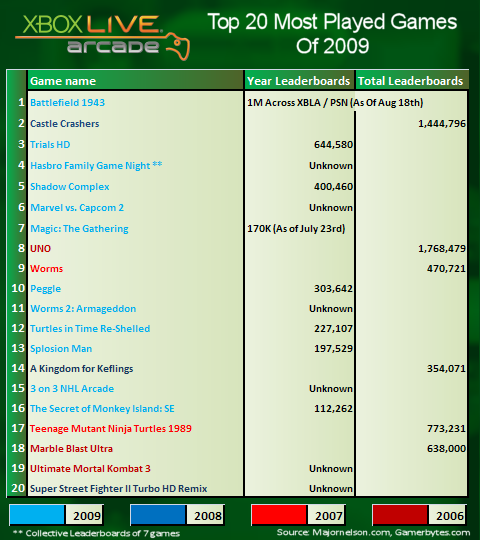 The 20 Most-Played Games For 2009 As he did last year, Major Nelson has released a top 20 list of the most played games in the last 12 months. It is based on the unique number of users who have purchased Xbox Live Arcade titles this year. Battlefield 1943 was the big hit this year, with over a million uniques across both the Xbox Live Arcade and PlayStation Network versions, while Castle Crashers still posts big numbers after more than a year on the market. In the 70 weeks that it has been available, it has never once dropped from the weekly top 10 list. Trials HD has had over 640,000 players, and truly is a phenomenon that surpassed everyone's expectations. Shadow Complex comes just behind it, followed by Hasbro Family Game Night with just over 400,000 unique users. This list also reveals some evergreen titles that continue to sell years after their release. UNO continues to be one of the best-selling Xbox Live Arcade titles four years since its release. Two other releases from 2006 also appear: Marble Blast Ultra and Ultimate Mortal Kombat 3, both which are part of the "hits" lineup and are priced at only $5. Much like Mortal Kombat II on the PlayStation Network, you just can’t get rid of Mortal Kombat. For 2007 titles, Worms and Teenage Mutant Ninja Turtles 1989 held up very well. Worms had a permanent price drop to $5 alongside Ultimate Mortal Kombat 3 in late 2008 and reigned on the top 10 for 33 weeks, only dropping off thanks to the sequel being released. Let’s compare 2008 and 2009’s lists: 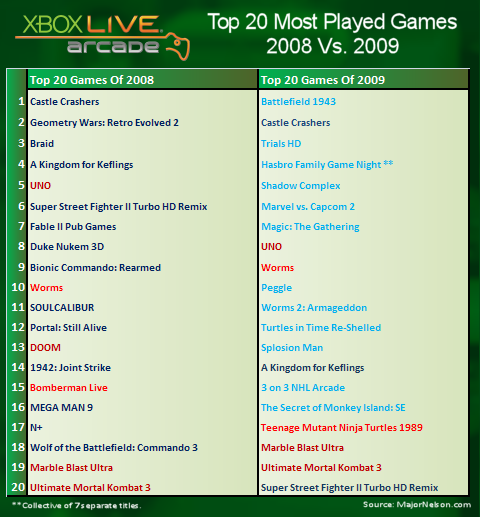 The Big List This list consists of 88 titles whose leaderboard data we have access to, but does not include the new releases. Past the weekly top 10, you can see some games still doing well, such as both Banjo Kazooie titles, Defense Grid, Diner Dash, Geometry Wars 2, and N+. However, some of the more recent titles like 0D Beat Drop and the Wallace & Gromit episodes are not doing as well. Thanks to Sonic the Hedgehog 2 being a deal of the week, it has beat the original Sonic the Hedgehog in unique users. All Sonic games now seem to sell an average of 5,000 copies a month, meaning about $100,000 is spent on Sonic per month on the Xbox Live Arcade. It’ll be interesting to see how Sonic Adventure holds up in comparison. It’s no wonder Microsoft is creating its retro-themed Game Room. 2010 – The Future The new year has started off with some big contenders. Serious Sam HD is already off to a big start, but we’ll also be seeing Vandal Hearts: Flame Of Judgement and Death By Cube, titles that are a little different from the usual set of games on the system. Vandal Hearts is especially unique -– a tactical RPG for $15 is an interesting proposal, but will it be any good? Let's find out next month.
Get daily news, dev blogs, and stories from Game Developer straight to your inbox
Subscribe