As part of his look at July's NPD retail results, Gamasutra's Matt Matthews compares a somewhat unusual month overall for platform sales to last year -- and find
Matt Matthews
Blogger
August 18, 2010
[Analyzing July's NPD U.S. retail console numbers -- and following recent spotlights on Xbox 360 S success and the fortunes of the rest of the hardware family -- Gamasutra analyst Matt Matthews looks at a somewhat unusual month overall for hardware sales, and how it compares to last year's.] Having examined each of the key platforms in some detail, we wish to view the hardware market one last way, by estimating where sales of each model of each system fell during July, and comparing to the market six months ago when we were able to perform a similar analysis. Using average hardware sales prices for July 2010 provided by the NPD Group, some modest linear modeling, and our own instincts about the market based on experience, we have arrived at the estimates provided below. We hasten to stress that these estimates are ours alone, and the actual figures shown in the full NPD Group report may differ. We have made a few assumptions about the hardware models on the market, and the prices at which they were being sold. In particular, we assumed that the Xbox 360 market consisted of three models (legacy Arcade and Elite models, at $150 and $250, respectively, along with the 250GB Xbox 360 S model at $300). Moreover, the PSP Go has seen enough discounts at retailers like Amazon, Dell, and Wal-mart in recent months to make us break the PSP category up into three prices rather than models. (As of this writing, the PSP Go is available for $200 from Amazon and Wal-mart.) Caveats aside, our figure below reveals that the leading hardware model for the month of July 2010 was actually the Xbox 360 S model, followed closely by the Nintendo Wii. 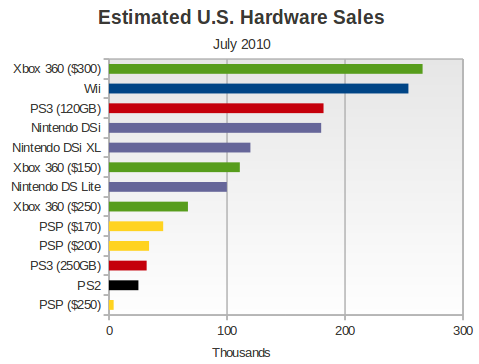 Some notable features of the estimates above: -We now believe that the Nintendo DSi and DSi XL are each outselling the older Nintendo DS Lite. -Whereas 60% of last month's Xbox 360 hardware sales were legacy models, we believe that 60 percent of this month's systems were the new model. This leads us to believe that Xbox 360 sales will again easily break 300,000 during August, besting every August in the system's lifetime. -If the revamped Arcade Xbox 360 S model proves popular at $200, we wouldn't be surprised by sales nearing 400,000 units in both August and September. For the sake of comparison, let us revisit the comparable graph from our February 2010 commentary. That figure is shown below 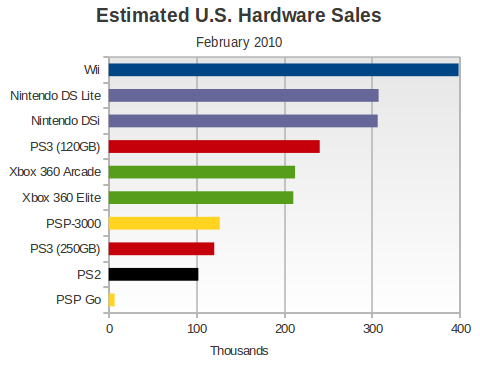 It is instructive to compare the scale on the horizontal axes in these graphs. Nearly every system has seen declines from half a year ago, and in some cases the declines are nearly unbelievable. Note for example how PS2 sales have fallen by nearly 75 percent and sales of the PS3 250GB system by nearly 66 percent (again, by our estimates). The Nintendo DSi is the lone exception. If we combine DSi and DSi XL (they are software-equivalent), then sales have not only stayed constant since February 2010 but also since July 2009. In all three months it appears that DSi-platform sales reached about 300,000 units. (The observant reader will ask whether these months all had the same number of weeks for the purposes of NPD Group reporting periods. Yes, February and July are both 4-week months in this regard.)
Console
Get daily news, dev blogs, and stories from Game Developer straight to your inbox
Subscribe