In Depth: The Xbox 360 Slim Effect

Analyzing June's NPD U.S. retail console numbers, Gamasutra analyst Matt Matthews looks at the Xbox 360 Slim launch -- has it sparked a hardware boom for Microso
Matt Matthews
Blogger
July 19, 2010
[Analyzing June's NPD U.S. retail console numbers, Gamasutra analyst Matt Matthews looks at the Xbox 360 Slim launch -- has it sparked a hardware boom for Microsoft, and how well are the system's software sales keeping up?] Microsoft's Xbox 360 system sales leapt ahead of the Wii in June, driven in part by uptake of the new Xbox 360 S (Slim) model introduced on June 14, 2010 at Microsoft's E3 press conference. The newer system was officially available for 15 days during the 35-day period during which the NPD Group measured what we refer to here as June sales. Simultaneously Microsoft cut the price of older Xbox 360 hardware by $50, dropping the price of the top-end Elite model to $250 and the entry-level Arcade to $150. Some retailers stacked offers on these prices (e.g. a $50 gift card) which essentially dropped the system's bottom price to $100, equal to the PlayStation 2 MSRP. According to Wedbush's Michael Pachter, most of the Xbox 360 systems sold during the month were actually these older, discounted models. As he wrote in his notes following the release of the NPD Group's data: “The slim version accounted for only 40 percent of Xbox 360 sales, with over 35 percent of sales captured by discounted Arcade bundles and the balance captured by discounted older models.” Total sales of the system – across all models – was just over 451,000 systems during June. The NPD Group's key game analyst, Anita Frazier, noted that June 2010 marked the system's second best non-holiday monthly total since September 2007 during the launch of Halo 3. In terms of a weekly rate, June 2010 (a 5-week month for the NPD Group) was actually slower than many other months, including February of this year and February 2009. Given the figures above, it would appear that 180,000 Slims were sold during a 15-day period, a figure that deserves some consideration. Were that pace just for the Slim model to continue through July (a 28-day period for NPD Group purposes), we would expect Xbox 360 sales of about 340,000 units, the best July in the system's history. However, the system need not maintain that pace to set a July record. Rather, if the system were to sell just 210,000 units, a mere 30,000 more than the number of Slims sold in June, then it would beat the figures for every July since the system launched in 2005. Going forward, Microsoft is expected to release an updated low-end model at $200 to replace the discontinued Arcade model. Since we believe these models have historically made up a majority of Xbox 360 sales (see, for example, our analysis from February 2010), we expect that Microsoft will not know the full effect of the Slim redesign until consumers can again purchase this low-end model. At this point we'd conservatively expect the Xbox 360 to hit sales of over 250,000 systems when the July estimates from the NPD Group are released next month. As the launch of the next Halo game approaches and a new $200 system is introduced, that rate could increase significantly. 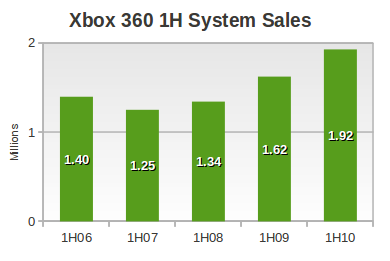 As shown in the figure above, Xbox 360 sales are already 18.5% ahead of last year's first half (1.92 million vs 1.62 million), and we believe the redesigned system is positioned well to appeal to consumers for at least the rest of the year. Just as the PS3 Slim led Sony to unprecedented sales, so might Microsoft expect to see another year of growth. For example, if the Xbox 360 demonstrates just 5% growth year-over-year in the back half of 2010, the system will break 5 million systems in annual sales. The actual figure for 2010 we expect to be as much as 5.5 million. As usual, we think that strong hardware sales foretell stronger software sales in the near term, but June provided no evidence of that fact for Microsoft. In its press release about May 2010 sales the company reported software sales in excess of $156 million. Yet for June the company touted only $151 million in Xbox 360 software sales, a decline of about $5 million. Since the NPD Group uses a 4-week period for May and a 5-week period for June, the decline last month was even more steep than the figures above would indicate. Taken as weekly averages, the company saw about $39 million per week in software sales in May and only $30.2 million per week in June, a drop of over 22%. The industry overall saw only a 9% decline in the average weekly software sales, month-over-month. What to make of this shift? We would point to a comment made by NPD's Frazier, on the topic of sales of top 10 titles and the titles that fall beneath the chart: “[Industry software] sales are down, but the top 10 SKU's for the month sold comparably to what the top 10 did last June – game sales are more concentrated this year on the top-selling games.” The Xbox 360 had the top-selling game of the month (Red Dead Redemption) and four other titles in the top 20, but the decline we see in its software revenue figure in June may be an indication that sales of older titles (catalog sales) demonstrated weakness both in unit sales and perhaps also in pricing. Fortunately for Microsoft, the year-to-date software revenue for the Xbox 360 is not as grim as the figures from the last couple of months. Given the revenue figures Microsoft has published in its press releases in several months along with comments made by analysts, we estimate that Xbox 360 software revenue is down only 3.9% so far this year, which compares rather favorably with the 8% decline for the industry overall.
Console
Get daily news, dev blogs, and stories from Game Developer straight to your inbox
Subscribe