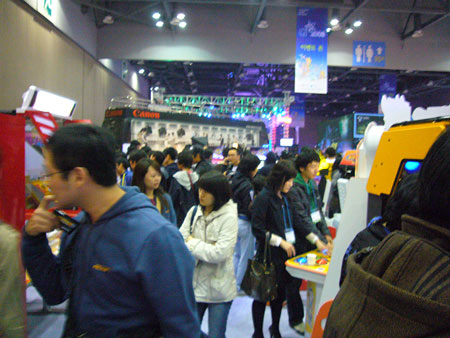 Last year, a number of developers told me they felt that the event was going downhill, getting smaller and smaller over the years. From that perspective, this year was actually a slight improvement. The show floor was visibly a bit more crowded, and NCSoft's just-launched Aion was on prominent display. More importantly, Nexon announced five new games which were previously unknown, during the show, which actually validates the stated intent of the event. And this makes sense indeed, considering that there are Nexon executives on the Gstar board of directors. But realistically, Gstar’s main objective seems to be showing the power of Korean games to the world. Quite simply, “we are here, we are great.” Feeling Gstar Those I spoke to about the event, press and publishers alike, felt that this year was indeed an improvement over the last, but that Gstar still didn’t have an immediate relevance to the current shape of the game industry. 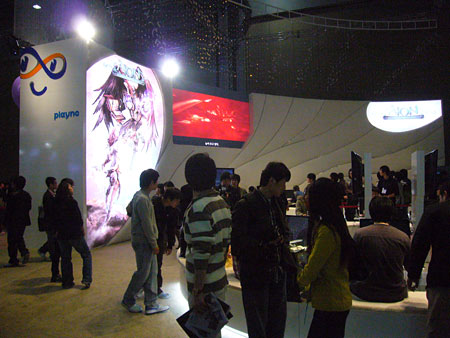 From the developer’s perspective, I spoke with several in-the-trenches types prior to the show, all of whom flatly stated that Gstar is “for government and executives.” Developers have little desire to go, though a manager at Neowiz mentioned that his team members would occasionally make the trip simply to see the booth babes -- which have this year been cut from the show (though everyone agrees this was for the better). Perhaps the most useful element of Gstar is the associated Korean Game Conference, or KGC, which is akin in spirit to the Game Developers Conference. KGC is held concurrently with Gstar, is quite well attended, and rather extensive in its scope. Developers I spoke with said essentially that the conference is far from perfect, but it’s much better than nothing. This is the kind of event that could not occur in Japan, for example, where sharing of technology, design, or knowledge of the product is often still forbidden even for two teams within one company. As incestuous as the game industry is worldwide, it’s even more amplified in the Seoul area, where most Korean game development takes place. 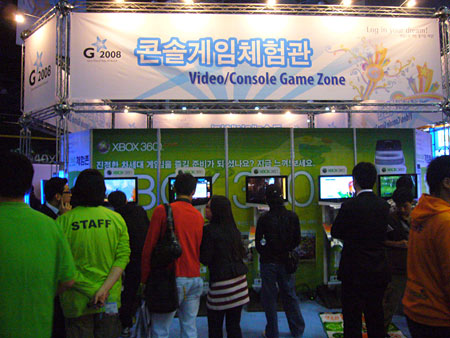 One need only go out drinking with one group of developers to see who knows whom... and the quick answer is everyone knows everyone, if you’re someone in the first place. KGC supports and is supported by this rather open group of developers, and is a hallmark of the different nature of this industry when compared to other development hubs in Asia. Walkabout The Gstar show floor itself is home to booths from the likes of NCSoft, Nexon, NHN, CJ Internet, Neowiz, and most of the major online players, with looping video trailers and PC kiosks for trying new products. Microsoft made a return appearance, showing off localized versions of Gears of War 2 and Fallout 3 – a potential draw for the small number of consumers that actually play console games. 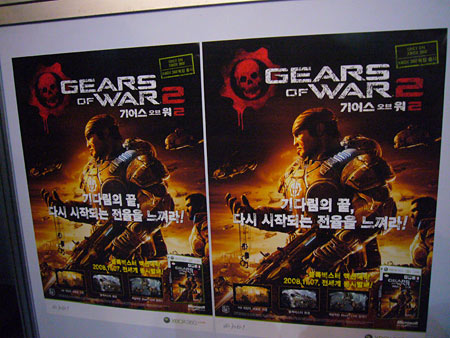 Unfortunately, the major, though absolutely unstated reason I perceive for Gstar’s existence, that is to say to promote the Korean industry to the world, is also the place that the show continues to need improvement. The event does little to engage the foreign audience in a meaningful way, and because of the same problem of being able to play an open beta from anywhere in the world, there is little reason for foreign press to attend. Gstar will never be a blockbuster event the likes of a 2006-era E3, but at least this year there was an effort on the part of the exhibiting publishers to make it somewhat worthwhile. If the organizers can continue to wrangle a few game launches, or perhaps attract the likes of a Nintendo or even some foreign exhibitors, Gstar’s fire will continue to burn. However, perhaps its flickering flame does not quite match the blaze of improvement that the Korean game industry itself has undergone in the last five years.
Console
Get daily news, dev blogs, and stories from Game Developer straight to your inbox
Subscribe