Gamasutra analyst Matt Matthews looks at the reality of the bundle-driven hardware pricing space, compares platform trends and suggests console offerings might n
by Staff
November 23, 2010
[As part of his look at October's NPD U.S. retail sales numbers, Gamasutra analyst Matt Matthews looks at the reality of the bundle-driven hardware pricing space and suggests console offerings might need price cuts to stimulate sales growth.] The top-line figures for the retail video game industry are grim. Hardware unit sales are down (15%, or 2.7 million systems) and so are hardware dollar sales (15%, or $575 million). Likewise, software unit sales are down (about 10%, or 14 million units) and so is revenue (7%, or $400 million). Where in these figures could the industry find a way to grow out of its current downturn? One path is to sell more hardware, and to do so as soon as possible, and try to drive software sales on the larger installed hardware base. To drive more hardware, however, it won't be enough to continue to bundle more in the box and hold the prices constant. Every manufacturer is doing this right now. The Wii is bundled with two software titles (Wii Sports and Wii Sports Resort) as well as a new MotionPlus controller, yet remains priced at $200. The Xbox 360 has similarly maintained its general price structure, and is currently pushing $300 and $400 systems bundled with Kinect cameras and software. Sony continues to offer a variety of models, including a $400 bundle with a Move controller, PS Eye camera, and Sports Champions. However, these bundles really don't do much to break into the population that wants to buy a system at $150 instead of $200 or more. As we've said in these columns before (as far back as when Sony began offering Uncharted PS3 bundles), a consumer who can't afford the cost of a $200 (or $300 or $400) console still won't be able to afford it with more stuff packed in the box. When we asked Michael Pachter of Wedbush Securities how much consumers would respond to the drop in price for a system like the Wii, he pointed to December 2009 sales. At that time, Walmart was aggressively marketing the Wii with a gift card that effectively brought the price down to $150, and other retailers offered other deals to entice consumers to buy a Wii. Consumers were, indeed, enticed and snapped up a staggering 3.8 million Wii systems during the final month of 2009. So, as a reality check, here are the average hardware prices for the main three consoles in October 2010.

Since Kinect had not launched in October, we believe that most of the Xbox 360 systems sold that month were between $200 or $300, with a smaller number of more expensive bundles available. That consumers appear to favor the more expensive systems, or are close to evenly split, suggests that Microsoft has its system pricing and value balanced fairly well. With Microsoft leading console hardware sales for six months so far this year, they won't be in any hurry to cut their price through the beginning of 2011. They could goose their sales with a price cut now, but they are probably quite pleased with the level of sales and the profit margin they have on the current hardware models. As the graph below reveals, Microsoft is well on its way to a record year, and the effect of the Xbox 360 S launch is clearly visible in the data for 2010. 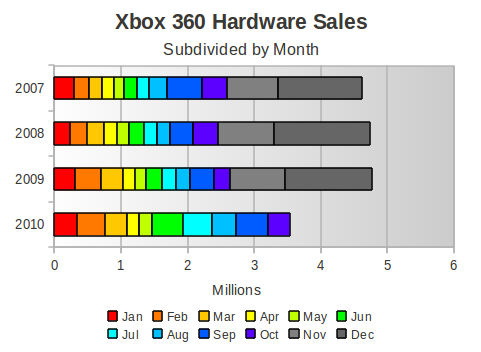 Sony's PlayStation 3 is down year-over-year, but that comparison pits today's sales against the very beginning of the $300 PS3 era. However, the $333 average price does tell us that consumers would prefer that the system be priced somewhat lower. Moreover, as the PS2 and PSP hardware sales become insignificant, it becomes more important that Sony increase its active base of consumers to continue to drive software sales. Sales would increase significantly, we believe, if Sony were to price its low-end system at $280. This could potentially peel off consumers from the Xbox 360 column who might otherwise be considering a $300 or higher console. To break into the real mainstream, however, Sony has to get its price much closer to $200. Sony has already dropped its price twice this generation – once in November 2007 with the introduction of the 40GB PS3 for $400 and a second time in August 2009 with the launch of the PS3 Slim at $300 – but those changes came nearly two years apart. It may take more than a year for Sony to bring its price to the $200 level. The effects of these price drops are easily distinguished in the graph below, which shows PS3 sales in the same manner as the Xbox 360 graph above. 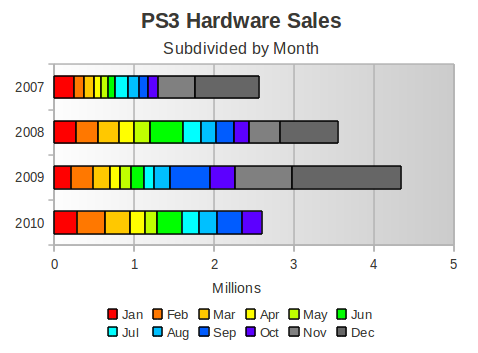 Without a price drop, Sony's console will still have an installed base of fewer than 20 million systems by this time next year. That's a serious handicap as their base of 46 million PS2 owners and 18 million PSP owners become obsolete. [Gamasutra analyst Matthews also covered the Wii's year-to-date performance in a separate article earlier this week.]
Console
Get daily news, dev blogs, and stories from Game Developer straight to your inbox
Subscribe