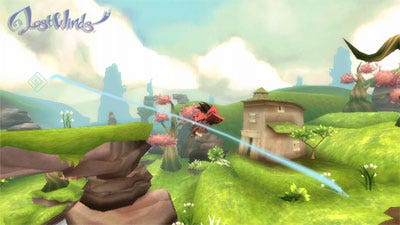 "It's perfect for the Wii," says Braben, "and actually was conceived of before the Wii, but when we saw it we thought, oh, wow that’s absolutely perfect." The company had a meeting with Nintendo at the end of 2007, with its idea already intact, and thought that with Frontier currently at 160 people, it could surely spare a WiiWare team. The Leg Of Lamb Test The idea itself, says Braben, came when Frontier initiated a 'game of the week' program, where someone would propose a new idea for the entire staff to pull apart, criticizing parts while praising others. LostWinds is the first 'game of the week' title that has fully come through the process. "It's a little like putting a leg of lamb into stream of piranhas," says Braben. "The water fizzes for a while, and anything left is pretty tough." He says that company wide there's been a massively positive reaction to the game, and especially from its 12 person team. "You can see that there’s a lot of love. For me the games I’ve really liked are games that you can see how much love has gone into it," saying that that love is apparent in the consistency of LostWinds' world, and the fact the team has created a rich backstory to the game, despite having little effect on the gameplay itself. Frontier managing director David Walsh called the gameplay, "in a funny way, single-player cooperative" -- main character Toku is controlled with the thumbstick, while the Wiimote harnesses the power of Enril the wind spirit. Toku alone is quite vulnerable, the two explain, "he's not particularly powerful, but he's a physical presence in the world," and needs Enril to protect and guide him by using the Wiimote to control the wind, helping him glide, pick up heavy objects and keep enemies away. 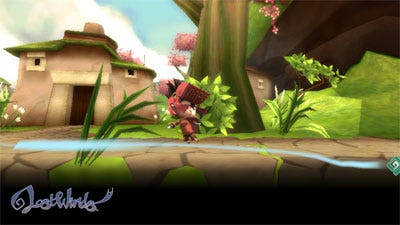 Braben asserts that LostWinds may be the first Wii title to exploit the console's controls in an entirely new way. "There are three categories of control systems -- just the Wiimote, games that use both with a slightly arbitrary assignment of keys, which takes a while to get used to, and a third which uses the Wiimote as a pointer in combination with the nunchuk. But then there's a fourth way, using each independently of each other which it turns out feels very natural -- we're probably the first to do that." WiiWare Against The Rest As one of the first announced WiiWare titles, we ask Braben how he believes the service will stand up to its console competitors. Apart from the fact that the Wii has fast gathered an impressive installed based, Braben said that while Xbox Live Arcade was easily navigable at first, "It's got very hard since. I don't even know if there's stuff that I want out there." The WiiWare service he said, could provide "potential solutions that don't apply to other services. It's for Nintendo to announce, but certainly from what I've seen it looks very interesting." The Cost Bracket Though the company has yet to decide on a set price point, we asked what Braben thought of Gamasutra's recent editorial on downloadable price points. He responded that, especially with broad-appeal games, the market is quite sensitive to price, and sales dramatically increase at lower prices, with sales spikes at each further price drop. "The problem we’ve got as an industry," he continued, "is where people see value in price -- if you put it at a low price, people think that must be rubbish. We haven’t decided the price yet, there’s a bracket, and it's a case of liking to see it out at a low price so it’s not a barrier." But are competing services driving price points down for the industry as a whole? "There is an expectation flipside of it, you're right," Braben said, "it is an issue, and I suspect Microsoft are trying to claw the price back up again. The problem is there isn’t a way of judging the service, and what you are going to get. I’ve seen some games on Xbox Live that look fantastic and others that are 'less so.'" 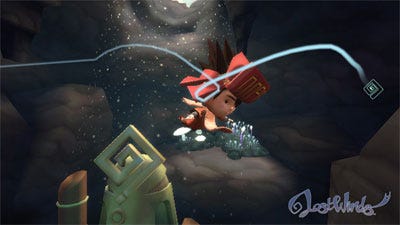 Finally, we asked if he thought WiiWare presented a good opportunity to launch original IP. "There's quite low risk to produce a game at all, not just original IP," he said. "LostWinds was conceived as a game for the Wii rather than a distribution mechanism. We still may release it as a disc based game in the future. It's not our currently plan, but wouldn’t balk at the idea." "We fully expect the WiiWare service to be a success," Braben concluded, "we think it will do really well."