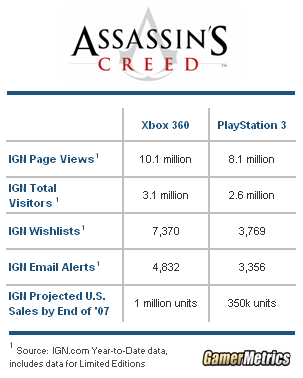 Adds GamerMetrics, "Based on our internal forecasting models, we expect the Xbox 360 version will sell approximately 1 million units in the U.S. by the end of the year, and the PlayStation 3 version should reach the 350,000 unit mark." [NOTE: For the purposes of compiling GamerMetrics' 'mindshare' number, two factors are combined: awareness data, based on the traffic patterns of the millions of monthly visitors to IGN.com (Avg. Daily Gamers), and purchase intent data - based on the activity of over 600,000 IGN.com registered users who regularly update their Wishlists.]
Console
Get daily news, dev blogs, and stories from Game Developer straight to your inbox
Subscribe