As part of Gamasutra's June NPD analysis, we're revealing the Top 5 year-to-date rankings for PlayStation 3, Xbox 360, and Wii games in the U.S. - with some nota
by Staff, Matt Matthews
July 20, 2009
As part of Gamasutra's June NPD analysis, the site is revealing the Top 5 year-to-date rankings for PS3, Xbox 360, and Wii games in the U.S. - with some notable games and surprises. Obviously, the Xbox 360, Nintendo Wii, and PlayStation 3 are currently the focus of much of the American video game market, and relative sales charts for the year so far are difficult to calculate. Therefore, the NPD Group provided us with exclusive ranking data on the top five games for each platform thus far in 2009. (Note: The rankings here do not include limited or collector's edition versions of each game.) PlayStation 3's Top 5 Year To Date PlayStation 3 software in 2009 is led by Sony's own first-person shooter, Killzone 2, launched in February 2009. As of the end of April, sales of Killzone 2 had reached 677,000 and we estimate that it is nearing 750,000 at mid-year. The second and third best-selling titles on the PS3 are both from Capcom: Resident Evil 5 and Street Fighter IV. The sales figures here are a bit less clear, since each of these games had a collector's edition. However, the fourth title, THQ's UFC 2009 Undisputed, does not have a collector's edition and has had sales in excess of 500,000 since its May 2009 launch. The final title, MLB '09: The Show, is Sony's first-party baseball title and we estimate that its sales are in excess of 425,000. The ranked top 5 for PlayStation 3 is as follows: 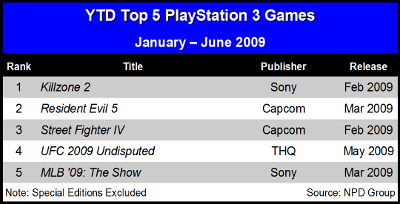 Xbox 360's Top 5 Year To Date Capcom's Resident Evil 5 tops the list on Microsoft's console, and its sales are known to be in excess of a million units, including the collector's edition. THQ's UFC 2009 Undisputed ranks second on the Xbox 360 in 2009, with known sales of 1.03 million units in its two months on the market. Activision Blizzard's Call of Duty: World at War takes #3 on the YTD chart, although its sales are difficult to estimate given its rankings this year and the fact that a collector's edition of the game is available. The last two games, Microsoft's Halo Wars and Capcom's Street Fighter IV we estimate both have sales of 500,000 to 700,000, but again the situation is complicated by the existence of collector's editions. The ranked top 5 for Xbox 360 is as follows: 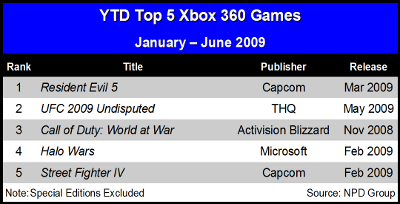 The lists for the Xbox 360 and PlayStation 3 share several similarities. Both have three titles in common (although ranked differently) and both feature key first-party properties (two from Sony, one from Microsoft). Also, with the exception of World at War on the Xbox 360, all of the listed games were released in February 2009 or later. Wii's Top 5 Year To Date Moreover, the sales are relatively modest compared to what we'll find on the Nintendo Wii list. On Sony's platform the five top-selling titles each have sales between 750,000 and 425,000 units. On the Xbox 360, the top five titles span the range from just over a million units down to 500,000 units. The list for the Wii is quite different, as we'll see below. 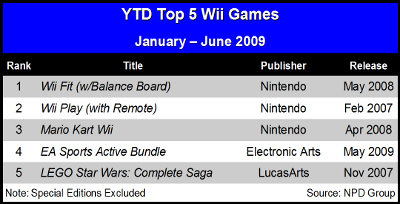 Here three first-party titles claim the first three spots: Wii Fit, Wii Play, and Mario Kart Wii. Sales of these titles are easily determined: 3.06 million, 1.5 million, and 1.4 million, respectively. All of those are clearly well above sales of the #1 title on the lists for the Xbox 360 and PlayStation 3. It was expected that EA Sports Active would rank fourth on the Wii, given its robust sales of 630,000 units since its release two months ago. However, we were surprised to see LEGO Star Wars: The Complete Saga take the #5 spot on the Wii list. This game ranked at the bottom of the top 20 list for the first three months of 2009, but then dropped out of view. According to the NPD Group, LEGO Star Wars: The Complete Saga for the Wii has sold over 400,000 units so far in 2009. This means that the fifth best-selling game on the Wii in 2009 has sales on par with the fifth best-selling game on the PlayStation 3 during the same period. The difference, of course, is that MLB '09: The Show just came out in March 2009 while LEGO Star Wars: The Complete Saga has been available for 20 months as of the middle of this year. In fact, only one game out of the five best-sellers in 2009 on the Wii, EA Sports Active, is actually from 2009. Two are from 2008 and another two from 2007.
Console
Get daily news, dev blogs, and stories from Game Developer straight to your inbox
Subscribe