SEARCH
A minimum of 3 characters are required to be typed in the search bar in order to perform a search.
PC
11 MIN READ
News 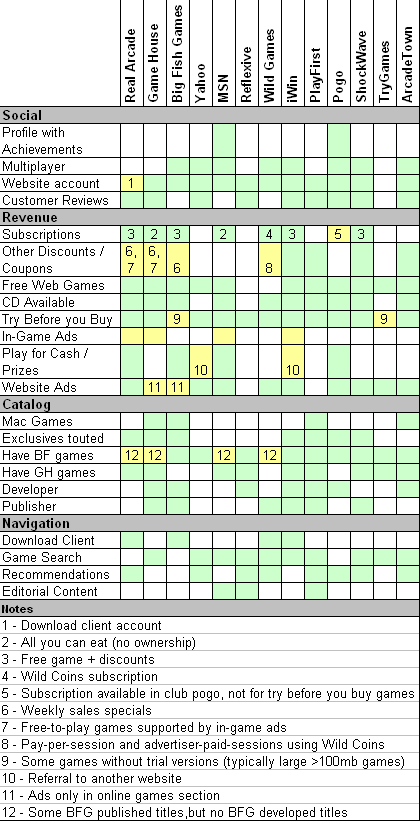 This chart was created by visiting the various portals listed. The different areas considered are listed on the left and the portals are across the top. For each category, a portal that contained the item in question received a green or yellow square. Green squares meant that the portal had the item in question, yellow squares mean that the item in question was only partially present. A white square means that the item in question was not found at the portal. The categories are as follows: Social Profile with Achievements – users can create a profile and track the records across multiple games Multiplayer – Presence of multiplayer games occurring on the portal’s servers Website account – Users can create a user account on the portal Customer Reviews – Users can review games on the portal Revenue Subscriptions – Players can subscribe to a monthly program to lower the cost of the games Other Discounts / Coupons – Portal offers discount program other than/in addition to subscriptions Free Web Games – Free games available, either flash games or web versions of downloadable games CD Available – Customers can purchase the game on CD, or a CD back-up when ordering Try Before you Buy – Demo may be downloaded before purchasing the game In-Game Ads – Games include in-game ads Play for Cash / Prizes – Players can compete for the chance at cash and prize rewards for playing Website Ads – Website includes advertisements Catalog Mac Games –The Portal has games for the Apple Macintosh Exclusives touted –The portal prominently mentions that it has exclusive games Have BF games –The portal carries games by Big Fish Games Have GH games –The portal carries games by Game House Developer –The portal is also a developer Publisher –The portal is also a publisher Navigation Download Client –The portal has a download client Game Search –There is a game search box on the portal’s website Recommendations –There are game recommendations given Editorial Content –There is editorial content (blogs, reviews, interviews) on the site
Console
Get daily news, dev blogs, and stories from Game Developer straight to your inbox
Subscribe