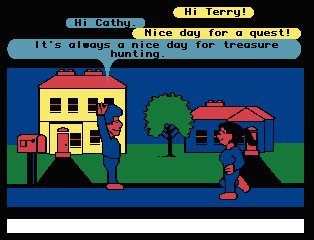 Habitat enabled modem-equipped Commodore 64 users to talk to each other in a virtual world. Habitat (known as "MicroCosm" until trademark issues prompted a name change; earlier iterations were "Lucasfilm Universe," "Lucasfilm Games Alliance," and "Lucasnet") stands out today as an astutely forward-thinking project. It was philosophically in tune with what gamers wanted, and was technologically about ten years ahead of its time. The Commodore 64 computer had a foothold in the U.S. home-computer market, and a 300-baud modem was the latest add-on gizmo that had captured the attention of hardcore enthusiasts. To support the launch of the modem by ensuring that content was available, Commodore had invested in an online company called Quantum Computer Services. Commodore approached Lucasfilm Games in a search for content that could run through the online company's QuantumLink service. Customers were paying online service providers such as CompuServe $12 an hour to access the fledgling network (and even $20 an hour for access during peak daytime hours). Q-Link, as it was known, undercut that price to around $3.60 an hour by renting out spare, unused server space during low-usage times. Through this partnership a deal was hatched to produce an online game, with Lucasfilm Games creating the front-end game -- Habitat -- on the Commodore 64, and Q-Link producing the back-end, server-side software. "We knew it was going to be hard, but we knew that connected storytelling was fundamentally where games should and would go," says Steve Arnold. Designer Noah Falstein had been working with one of the team engineers, Chip Morningstar, on the game concept. To capture the broadest reach of potential customers, they settled on a familiar modern day setting. Development began in 1985 and sketched out a virtual world where each player had an in-game "avatar" -- a word defining a player's online representation (and still used today). These characters could interact with other players, connected in a massive online world composed of 20,000 "regions" -- essentially individual screens connected to as many as four additional regions. Even within the company, explaining this brave new frontier of interactive entertainment wasn't easy: its concept simply hadn't existed up to this point, and so artist Gary Winnick created a storyboard to illustrate the idea in pictures. 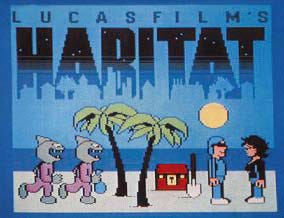 Reproduction of Habitat's title screen. A version of Habitat was licensed to Fujitsu to release for its FM Towns system. Despite the apparent advantage of not having to program artificial intelligence for in-game characters, given that all the players were real people, creating rules for player interactions required the developers to broach subjects never before considered in game design. Remarked Chip Morningstar in a long treatise on Habitat's creative process: "A special circle of living Hell awaits the implementers of systems involving that most important category of autonomous computational agents: groups of interacting human beings." The team needed to ask innumerable questions about what was allowed and what rules or laws governed player interaction; for example, if you permitted an action like taking an object from another player, what happens when one character takes an item and runs or logs off? To find workable answers took trial, error, and incredibly creative thinking—and also required a significant beta test among the Q-Link users. 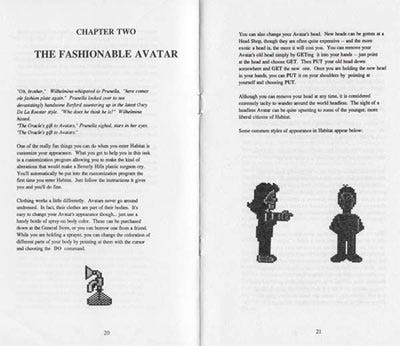 A page from The Official Avatar Handbook: A Comprehensive Guide to Understanding Habitat from Lucasfilm Games and Quantum, provided to beta testers in 1987 The game debuted internally at Lucasfilm Games at a company meeting in early 1988, with Gary Winnick creating in-game avatars that looked like George Lucas and Steve Arnold. Only 500 disks of the beta software for this superbly innovative project were made available, and they were quickly snapped up by Q-Link users. Chat rooms were the major entertainment source over these 300-baud modems, and the Rabbit Jack's Casino program proved popular among the 50,000 Q-Link subscribers. Some 15,000 Rabbit Jack's disks had been distributed to the subscriber list and players of that game accounted for about three percent of the total system usage. Upon its beta release, Habitat's 500-disk distribution went to users who gobbled enough logged time to account for a full one percent of the entire system usage. Clearly the product spoke the language of early online-entertainment adopters, and this relatively small group of users was spending a vast amount of time exploring and interacting with the world and its people. It looked like Habitat was a huge hit-in-the-making, and so in the fall of 1988 the beta was taken to a New York nightclub for a launch party as Lucasfilm Games and Q-Link prepared to revolutionize gaming. But a problem lurked. Essentially, if 500 users were so committed to playing Habitat that they remained online long enough to eat up 1 percent of the network's entire system bandwidth, a full-run production that could attract Rabbit Jack's Casino numbers could boost that bandwidth number to 30 percent. "The way the system was built, the server software wasn’t capable of hosting that population while still being successful," recalls Arnold. Ultimately, these business challenges caused Habitat to be cancelled after the launch party, but before it had gone into full production and reached retail shelves. It would simply be too popular, and the necessary server fix would be too expensive to make the project viable. And so this massively original, inventive, and cutting-edge project was shelved for U.S. release. 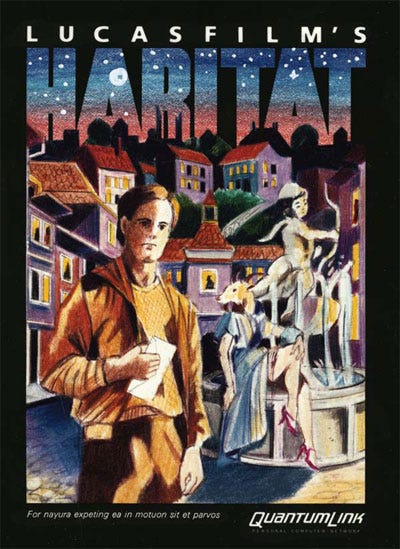 Habitat's concept of an online community was way ahead of its time, and it was never commercially released in the United States. This piece of concept art was intended for Habitat's box cover, with placeholder text and the QuantumLink logo, circa 1985 (artist unknown). From a business perspective, however, Habitat wasn’t a failure. The game was licensed to Fujitsu for use on its FM Towns PC-like platform, and the successor to Habitat was recast (with several of the original planned features now cut) as Corpe Caribe, described as an online Club Med, where it enjoyed some success. Though Habitat never received a commercial release in the United States, Lucasfilm Games was able to recoup most of its development costs through these side deals. As for Quantum Computer Services, in 1989 -- just a year after working toward a launch for Habitat -- the company changed its name to America Online. The pioneering work on Habitat by Chip Morningstar and Randy Farmer, the two programming gurus who had built the system infrastructure, earned them a First Penguin Award at the Game Developers Choice Awards in 2001. Conceived by co-worker Noah Falstein, the award [was given annually] "to recognize the courage and bravery of a developer who tested the proverbial waters, uncertain of success or failure. A 'First Penguin' served as a lesson, and inspiration, to the rest of the community over the years." [Rogue Leaders is available now, and is "the first substantive survey of a videogame company", also including "300 pieces of concept art, character development sketches and storyboards... to showcase the creative talent behind such video game classics as The Secret of Monkey Island Grim Fandango and Star Wars: Knights of the Old Republic, as well as games that were never publicly released."]