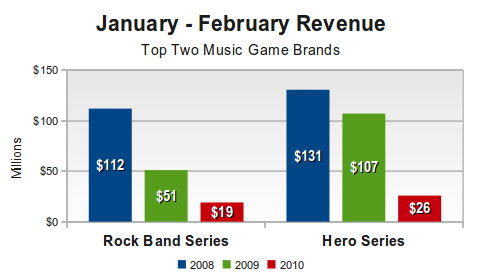 Yet February 2009 was a month in which total industry revenues grew, and software revenue itself grew by nearly 9 percent. Some of this could be attributed to sales of higher-priced bundles – remember that Guitar Hero III selling in early 2008 had only included guitars while Guitar Hero: World Tour selling in early 2009 included guitars, drums, and microphone bundles. But in fact, the average price of software in February 2009 dropped, so the prices can't explain everything. Somehow in 2009 the industry more than made up for a loss of $85 million in music genre contraction. With a 50 percent larger base of current-generation console hardware, why wasn't the same possible in 2010?
Console
Get daily news, dev blogs, and stories from Game Developer straight to your inbox
Subscribe