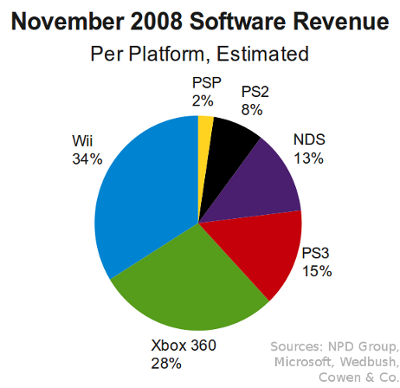 The share we can attribute to the Xbox 360 amounts to 28%. Sony accounts for exactly one quarter of the software revenue with its three platforms: PlayStation 3, PlayStation 2, and PSP. After 12 months, the picture has shifted dramatically. As the following figure shows, software revenue from the Wii now accounts for under 30% of the market. Combined with the share from DS software, Nintendo now holds only around 40% of the market – a drop of 7 points from the previous year. 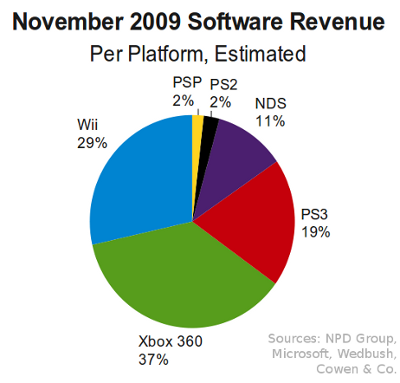 Software performance for the PlayStation 3 has improved throughout the year, and it was one of the two platforms (along with the Xbox 360) to show year-over-year growth in November. Unfortunately for Sony, revenue from PlayStation 2 software has nearly collapsed. We now estimate that Sony's total share of the market contracted slightly to around 23% in November of 2009. Microsoft's Xbox 360 has stepped into the gap left by its competitors and increased its share of the November software market almost 10 points, from 28% in 2008 to 37% in 2009. In raw dollar terms, that's an increase of over $100 million. Given that the Xbox 360 version of Call of Duty: Modern Warfare 2 brought in at least $260 milllion by our estimates, all of the growth of Microsoft's software revenue can be attributed to its commitment to making the Xbox 360 the platform most associated with the best-selling game of the year.
Console
Get daily news, dev blogs, and stories from Game Developer straight to your inbox
Subscribe