Examining September's NPD results, Gamasutra analyst Matt Matthews finds that the Xbox 360 is in lockstep with Wii for best-selling platform of 2010 -- and on t
Matt Matthews
Blogger
October 18, 2010
[Examining September's NPD results as part of our larger monthly in-depth feature, Gamasutra analyst Matt Matthews finds that the Xbox 360 is in lockstep with Wii for best-selling platform of 2010 -- and on the software front, is outperforming all competition.] Having outlasted the Wii's extraordinary sales run from November 2006 through March 2010, during which Nintendo's console racked up nearly 29 million system sales, the Xbox 360's recent success demonstrates how persistent and focused Microsoft's team has been this generation. By what measures should one compare? If one chooses hardware, then the Xbox 360 now appears to be tied with the Wii for the best-selling platform of 2010. The data provided by the NPD Group actually puts the Xbox 360 up by just over 10,000 units, but we consider that small enough fall within the margin of error. Let us say that both systems have sold just over 3.2 million systems so far in 2010 and call it even. If, on the other hand, one chooses to measure software sales, the Xbox 360 is outperforming the competition handily. On just a dollar sales basis, Microsoft's console appears to be outselling the Wii by 30% so far in 2010. In terms of unit sales, the picture is less clear but given Microsoft's persistent 8.9-9.0 tie ratio throughout this year, we believe that 2 to 3 million more units of Xbox 360 software have been sold so far in 2010 than for the Wii. Even in the accessory segment, the Xbox Live 1600 Point Card has replaced the Wii remote as the top-selling item. Perhaps the most telling image we can provide for the Xbox 360's continued strength is the following graph. This shows the increase in year-to-date sales for each of the big three platforms: Microsoft's Xbox 360, Nintendo's Wii, and Sony's PlayStation 3. 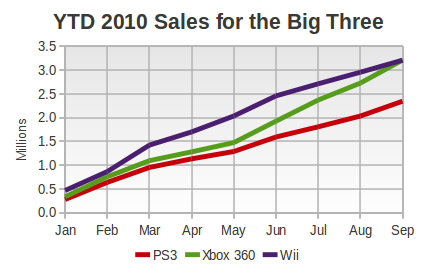 At the beginning of 2010 the Xbox 360 tracked most closely with the PlayStation 3, maintaining a modest margin over its high-definition competitor. During this period the Wii built up a nearly 500,000 unit lead over Microsoft's console. Then in June Microsoft launched its new Xbox 360 S Model (commonly referred to as the Xbox 360 Slim), with updated features while maintaining its previous price structure. In the following three months (July through September) the Xbox 360 erased that entire half-million unit lead Nintendo had for the year. Just as impressive is the fact that the average price for the Xbox 360 has remained at least $60 above the average price for the Wii during this period. Given that many Xbox 360 systems are purchased without a pack-in game, the entry-level cost for Microsoft's system is even higher, especially when all Wii systems come with not one but two pack-in first-party games. With the Kinect motion-control system launching in early November, and an extensive advertising budget, the Xbox 360 is positioned extremely well for the remainder of 2010 and well into 2011. Microsoft can hold out another six months before it draws on its other ace, a possible price drop, especially if Kinect connects with consumers. (We remain dubious on Kinect's prospects and consider its outright success far from a foregone conclusion.) We've not even mentioned the top-selling game for September, Halo: Reach, which totaled 3.3 million units across three different versions for the month. In fact, according to comments by Wedbush's Michael Pachter, the top three revenue-generating SKUs on the Xbox 360 in September were all versions of Halo: Reach. While Microsoft has yet to replicate the success of Nintendo's evergreen software strategy -- it will have an opportunity with family-oriented Kinect titles, perhaps -- it has refined the art of a game launch as a media event, and no series embodies this more than the Halo series. There is an appealing parallel here with 2007, which we feel will could be instructive for the final quarter of 2010. Recall that in August 2007 Microsoft cut the price on its systems just prior to the launch of Halo 3, and as a result it saw extraordinary hardware sales in September. In the last quarter of that year, the console saw its hardware sales increase 29%. If we consider three events -- the robust Xbox 360 S uptake, launch of Halo: Reach, and introduction of Kinect -- as driving sales, then we think Microsoft could easily see a 30% increase in annual hardware sales. Under those circumstances Microsoft would sell approximately 6.3 million systems in all of 2010. If Kinect does well, or at the very least the promotion keeps the Xbox 360 in front of consumers, then we could envision that total reaching 6.6 million systems. 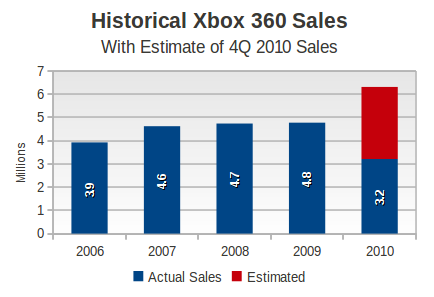 Finally, we cannot speak of the success of the Xbox 360 without mention of its increasingly compelling Xbox Live subscription service. Not only does Microsoft continue to add functionality and score exclusive content deals (for example, all map packs for Call of Duty games will launch first on the Xbox 360 through 2012), but it even feels it has room to raise the subscription fees without hurting its bottom line. As of 1 November 2010, the price for an annual subscription to Xbox Live Gold will rise from $50 to $60.
Console
Get daily news, dev blogs, and stories from Game Developer straight to your inbox
Subscribe