Gamasutra's stats whiz Matt Matthews investigates an interesting Sony PR-forwarded claim on game hardware sales -- as
Matt Matthews
Blogger
August 03, 2009
[We asked Gamasutra's stats whiz Matt Matthews to investigate an interesting Sony PR-forwarded claim on game hardware sales -- and as he notes: 'Linear modeling is fun and easy -- but also of limited value for extensive extrapolation.'] Porter Novelli -- Sony's PR firm -- recently forwarded Gamasutra editors a link to a story at Total Video Games which extrapolates global shipments of the PlayStation 3 and Xbox 360 over the next few years. The upshot is that, according to the models, the PlayStation 3 [graph link] will have caught the Xbox 360 [graph link] by 2011 -- something that Sony would be quite happy to have people know about, of course. Porter Novelli particularly cited the following: "- TVG research has shown that at each console's current rate of growth, sales of PlayStation 3 units will overtake those of the Xbox 360 in January 2011 according to sales figures published by Microsoft and Sony to-date. - While this is merely an estimation of future sales according to current sales trends, it does nonetheless reveal that Sony has been selling PS3s at a faster rate than Microsoft has Xbox 360s. This is despite higher total sales for Microsoft's console, which are the result of a one year head start on the market." It's likely that the TVG authors weren't trying to do a rigorous market analysis, but it should be pointed out that a linear model, as they used to estimate forward, isn't always ideal, especially when one uses it to extrapolate too far away from the known data. If we were doing something similar at approximately the same point in the lifetime of the Nintendo GameCube, for example, we'd end up with the following figure: 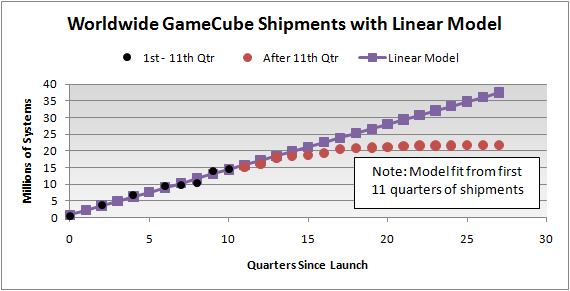 The black points are the worldwide GameCube hardware shipments through the 11th quarter. The purple line is a linear fit to that data. Looks great up to that point. The full set of known GameCube shipment data ends in mid-2008. By that point in time, the linear model would predict 37.5 million GameCube systems. However, Nintendo says they only shipped 21.74 million systems at that time. Look at the red data points in the graph above. There's no way the GameCube is ever hitting 25 million, much less 37.5 million. Using the same principle and data from Microsoft, we could estimate that the original Xbox would have sold 31 million systems by mid-2008. The last data I'm aware of for the system (from December 2005, when the Xbox 360 was already on the market) pegs its global total at 24 million systems. I'm fairly confident that it hasn't gone much further since then. Doing the same again for the PlayStation 2 (11 quarters of data, make a linear model), we could have predicted global sales of 115 million systems by March 2007. According to Sony, the system had reached 118 million systems by that point. In this case, the linear model does a remarkably good job of prediction. I'm not discounting linear models -- they're terribly useful in certain situations -- but they also have their limits, just like any other idealization. We can't know that the linear models in the Total Video Games article won't be right, but there is ample reason to be very skeptical. [Picture hat tip to XKCD, thanks to Gamasutra Blogs commenter Tyler Glaiel for pointing out.]
Console
Get daily news, dev blogs, and stories from Game Developer straight to your inbox
Subscribe