Analysis: Wii and DS Hit All Time Lows In U.S.

Looking at August's NPD results, Gamasutra analyst Matt Matthews finds Nintendo platforms lagging -- Wii hardware has hit a lifetime low, and could weakness in the
Matt Matthews
Blogger
September 14, 2010
[Looking at August's NPD U.S. console retail results, Gamasutra analyst Matt Matthews finds Nintendo platforms lagging -- Wii hardware has hit a lifetime low, and could weakness in the DS market be attributed to iOS platforms?] For at least six months analysts have been asking serious questions about the direction of the Wii market, in particular the software segment. This was not idle chatter – the Wii software market has had only one month of year-on-year growth in it the past year. When Nintendo introduced its Wii MotionPlus hardware bundle, which comes with both Wii Sports Resort and Wii Play, Wedbush's Pachter suggested that this would erode software sales further. While we are in no position to assign causality, we will note that software sales have declined by 19 percent, 30 percent, and 38 percent in June, July, and August, respectively, compared to those same months a year ago. One difficulty is the continued strength of Wii titles on the top 20 software chart. In August alone, six titles for the Wii made it into the top 20, two developed and published by third-parties. The figures for July were similar, with seven Wii titles of which three were by third-parties. One must accept that the top 20 chart does not tell the full story. Combined with what we know about software sales generally on the Wii, we can say that a selection of titles that do exceptionally well – Nintendo's Mario titles along with trendy third-party titles like Just Dance and Wipeout: The Game – while many others languish somewhere below the public rankings. At some level, this is true on all platforms. The absence of Kane & Lynch 2: Dog Days in the August top 20 suffices to establish this point. However, the Wii is notable for being both the best-selling current generation console of the last 12 months and the one with the greatest decline in software sales so far this year. Year-to-date Wii software dollars are down an estimated 23 percent, while the Xbox 360 is essentially flat and the PlayStation 3 is up about 35 percent. (See table below.)

While total software dollars are down nearly 9 percent so far in 2010, the current generation console software segment (Wii, Xbox 360, and PlayStation 3) is practically flat with the same point last year. That is, all the ground lost by Wii software has been made up by gains in PlayStation 3 software, for a net change of approximately zero. As long as Nintendo continued to sell Wii systems at a blistering pace, the software market seemed able to support itself. We believe that a significant portion of Wii software is bought by new owners (what we would define as those within the first six months of ownership), and continued hardware sales provided ample supply of new owners to snap up Wii software. Wii hardware has now hit an all-time low, recording its weakest monthly total since the system launched in November 2006. In terms of average weekly sales only March 2007, a five-week month, was weaker. The figure below gives an idea of just how weak this summer has been for the Wii; April, May, July, and August 2010 are identified in red. 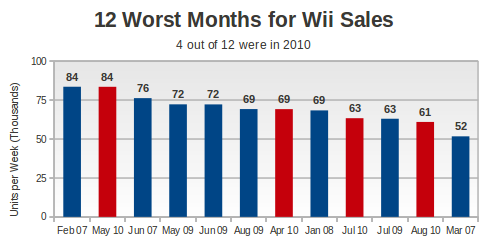 Given the amazing sales the Nintendo Wii racked up in December 2009, we are hesitant to write off Wii hardware and software sales for the entire year. If sales return for the holiday this year, much of Nintendo's lost ground could be made up, especially with the pending launches of Wii Party, Kirby's Epic Yarn, and Donkey Kong Country Returns. Even if the Wii consumer is a seasonal creature, it seems unlikely that consumers will again buy 5 million Wii consoles and $1.5 billion in Wii software during the last two months of the year. The Nintendo DS platform, represented by three hardware models, is also experiencing a similar weakness in sales. Ever since the launch of the Nintendo DS Lite back in the summer of 2006, the dual-screen handheld has consistently dominated hardware sales. There have been only three times in those 51 months that the DS and Wii haven't taken top hardware sales: September 2007 with the launch of Halo 3 and July and August of 2010. There are several possible explanations here. We consider the large installed base (second only the PS2 for systems still being sold) and the current price structure to be the key limiters. The base system is still $130, and has remained at that price since 2005, and the DSi and XL models are $150 and $170, respectively, after a price drop on 12 September 2010. Sales of hardware at these prices will be recorded in the NPD Group's estimates for September. Michael Pachter of Wedbush Securities suggests that the iPod Touch has become a legitimate threat to the handheld segment, and that the Nintendo DS is suffering as a result. We did our own examination of the console/handheld sales figures and found that, indeed, handheld software marketshare is at a historically low point relative to console software. (See the figure below.) 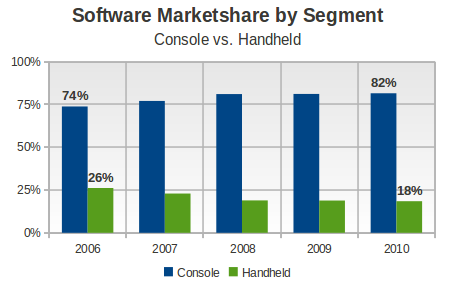 Whereas handheld software often accounts for around 25 percent of all software revenue in any given 12-month period, that share has dropped nearly constantly since around January 2008, six months after the launch of the iPhone and four months after the launch of the iPod Touch. As of August, it hovered between 18 percent and 19 percent. The fortunes of the handheld market should reverse upon launch of Nintendo's new handheld, the 3DS. Except for speculation about the price (an announcement is expected within two weeks), practically all press about the system is exceptionally positive. We expect that consumers will buy it at least as quickly as they bought the Nintendo DS Lite and Nintendo DSi at their respective launches, despite our estimated $230 - $250 price tag. Along with a compelling slate of announced software, the 3DS will make the handheld segment hot once again.
Console
Get daily news, dev blogs, and stories from Game Developer straight to your inbox
Subscribe