Analysis: Why Sony Is Becoming A One-Platform Game Company 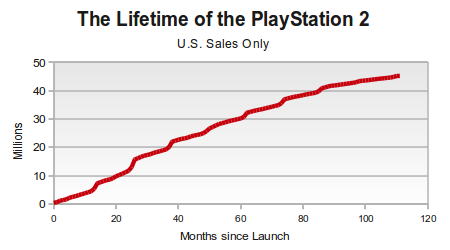 Sony reported several years ago that software unit sales had exceeded 1.24 billion units, with over 500 million of those just in North America. Yet, in January 2010 the PlayStation 2 hit a historic low of just over 10,000 systems per week. And according to Wedbush Securities analyst, Michael Pachter, the system's software revenue has been down well over 60% for the last six months, compared to the time one year earlier. In fact, PlayStation 2 software revenue dropped to around 2% of the entire U.S. video game software market in January. According to the NPD Group, the five best-selling games on the PS2 in 2009 included three sports games, a music game from 2008, and Grand Theft Auto: San Andreas (originally released in 2004).

At the same time that the PS2 has become irrelevant, Sony's PSP has been suffering declining hardware and software sales of its own. From 2005 through 2008, the handheld has achieved sales of nearly a million units in the U.S. in the final month of the year. Yet in December 2009 Sony sold just over 650,000 of the handheld, including the newer PSP Go model. As the figure below shows, hardware unit sales in the last four months of 2009 were 30% lower than in the last four months of 2008. 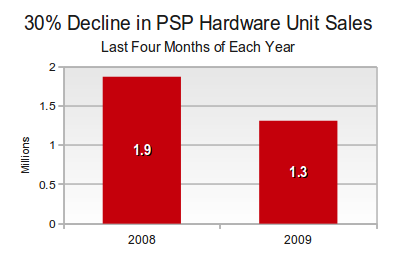 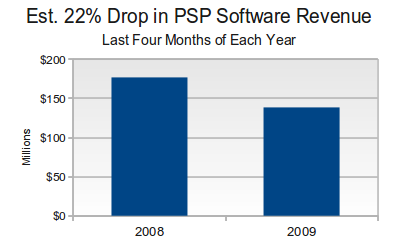 Sony tried to push the PSP back to the forefront with the PSP Go launch and the arrival of several high-profile games at the end of 2009. Among these were Gran Turismo, a game promised and expected since the system's 2005 debut, and Grand Theft Auto: Chinatown Wars. Yet with Sony heavily backing Gran Turismo and an established GTA fanbase on the PSP, these two games still failed to make the top 5 PSP games in 2009. Instead Square-Enix's Dissidia: Final Fantasy was the top-selling PSP game for the year. The only other 2009 title to make the top 5 was EA's Madden NFL 10.

It's difficult to say where Sony should go with the PSP at this point. When it launched, it was a strong internet-enabled gaming device, but in the era of the iPhone and Nintendo DSi the PSP's advantages have largely disappeared. We don't see the advantage of the rumored PSP-4000 (thought to still contain a UMD drive), but would favor winding down the current hardware platform and preparing a successor with backward compatibility to hasten the transition. The problem is made more complex by the PSP's continued strength in Japan, where it continues to sell relatively well and where several PSP titles sold well in 2009. Which brings us to the PlayStation 3, the only part of the PlayStation family that doesn't appear moribund. In fact, it seems notable that SCEA president and CEO, Jack Tretton, did not even mention the PSP or PS2 in his recent comments posted on the PlayStation Blog. At $300, the newer Slim hardware model has revitalized the prospects of the PS3 for 2010. Sony still expects to launch several big titles, like God of War III and Gran Turismo 5, sometime this year. Other titles, like Square-Enix's Final Fantasy XIII -- the latest in a franchise closely associated with the PlayStation brand -- could also figure into the system's popularity with consumers, although the game will also be on Xbox 360. On the other hand, we have yet to determine the value of Sony's upcoming, unproven motion controls and 3D television compatibility. Yet, even these hardware and software sales will not cover the losses from the other two systems. Compare our estimates of Sony's software and hardware revenues in January 2009 and January 2010 below, and it is clear that the PS2 and PSP slices are shrinking faster than the PS3 slice is growing. We estimate that the combined software and hardware revenue from the PS2 and PSP accounted for less than 6% of the hardware and software market in January 2010. 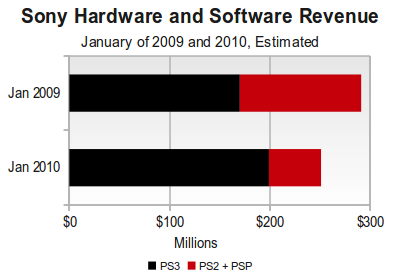 In the coming year we expect the winding down of the PlayStation 2, including the end of the iconic Madden NFL series on the system. We think it's likely that Sony will announce a true successor to the PSP, perhaps not due until 2011. Then Sony will effectively be a one-platform company, at least for 2010. To that end, Sony will spend most of the year touting the out-of-the-box value of the PS3 while declining to respond to any price drops by competitors. After all that, it seems likely that Sony's share of the market (in dollars) will finally end up around the same as that of its most direct competitor, Microsoft.
Console
Get daily news, dev blogs, and stories from Game Developer straight to your inbox
Subscribe