SEARCH
A minimum of 3 characters are required to be typed in the search bar in order to perform a search.
Announcements
Event
Free Webinar on 5/24: How Predictive Analytics Drives Mobile Conversions & Boosts Revenue - Register Here!
PreviousNext
PC
5 min read
article 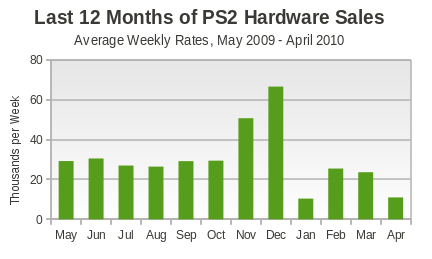 Prior to April, PSP software sales were commonly known to be quite poor, especially relative to its installed base of over 17 million systems. With the apparent collapse of hardware sales, the situation has gone from difficult to nearly impossible. Look at it this way: on average no more than three PSP systems were sold at each retail store every two weeks in April. In reality, online sales probably drove that average to 1 system every week, or lower, at brick-and-mortar locations. What are Sony's options? We've long suggested that a PSP successor should be announced sometime in 2010, although the actual launch of that system could realistically come any time from the end of 2010 into mid-2011. Another option is to soldier on stoically and continue to support the existing base with software both on UMD and through the PlayStation Store on PSN, although we would argue that this leaves the PSP brand, such as it is, open to further degradation. The figure below shows how PSP sales have varied over the past 12 months, ending with the weakest sales in April 2010. 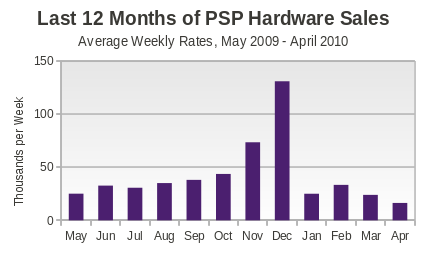 While Sony's PlayStation 3 was up 32 percent year-over-year, monthly sales of 181,000 units still falls short of the industry's expectations. In response to April's sales, SCEA President and CEO Jack Tretton made no mention of the hardware shortages that the company has suggested as a key cause for sluggish PS3 sales earlier this year. Sony has clearly improved its fortunes in 2010 – NPD's Frazier noted that the PS3 was the only system to see growth across all segments in April – but its hardware is lagging. If Sony has a good explanation for why its flagship system sold 90,000 systems per week in February but only 45,000 systems per week in April, we'd be interested to hear it. Maybe they company is still having difficulty getting hardware to retailers. Fortunately, the company has three very easy comparisons in May, June, and July, so it will be able to continue to tout year-over-year sales increases until at least August. Microsoft's Xbox 360 had another record first quarter and is still up year-to-date from the same time in 2009 after the modest April results. At the end of that month the system was on the cusp of breaking the 20 million system barrier, and has no doubt passed that milestone as of this writing. Even as Sony's PS3 sales have improved, the Xbox 360 has maintained a healthy lead over its main competitor. The conventional wisdom holds that Microsoft can move on the pricing of its system at essentially any time, and that it will exercise that power as needed later this year. We think this is reasonable, especially as the company incorporates Natal into its system bundles later this year. As for Nintendo, the Wii had the weakest sales it has had since mid-2009, but the new hardware bundle should bolster the system's sales in the near term. As for the Nintendo DS platform and its three systems (Lite, DSi, and DSi XL), the results of April 2010 were very encouraging. In a conversation with Pachter, he suggested that Nintendo DSi XL sales were roughly three times the level of PSP sales during the month. That's certainly a lower average rate than the system saw for its launch in March, but we are impressed that the newer model with its larger screen and commensurately higher $190 price accounted for more than 40% of the platform's sales for the month. While an exact hardware breakdown is not publicly available, we can estimate that at worst the Nintendo DS platform now has an average price that is at least $8 higher than the system's 2004 launch price of $150. We're not aware of any other console or handheld whose average price has risen above its launch price after more than five years on the market.
Console
Get daily news, dev blogs, and stories from Game Developer straight to your inbox
Subscribe