The fortunes of the U.S. video game hardware market have shifted dynamically since mid-2008, and a focus on the last four months reveals interesting dynamics. Can price cuts resuscitate sales? Gamasutra investigates...
Matt Matthews
Blogger
August 18, 2009
[Extracting from Gamasutra's just-published in-depth feature analysis of July's NPD numbers, Matt Matthews finds some interesting trends in the U.S. console hardware market from the last four months, examining the possible impact of price cuts for each system.] Looking back at mid-2008, the fortunes in the hardware market have shifted dramatically. The Nintendo Wii was still barely meeting consumer demand and the PlayStation 3 was coming out of a strong six-month sales run, capped with the June 2008 release of Konami's Metal Gear Solid 4. However, the Xbox 360 was clearly in need of another price cut, which it did finally get coming out of the summer season. After that, its sales increased significantly, and it has ridden a wave of robust sales since that point. Today all eyes are focused on a price cut for the Nintendo Wii and the PlayStation 3, while the Xbox 360 is seen as having a strong year so far. If we focus on the last four months – April through August – there is an interesting dynamic at work in the hardware market. First, the Nintendo Wii has seen diminishing average weekly sales rates, down 26% since April. While it is true that summer is not necessarily a period during which sales should grow, the comparably priced Xbox 360 has actually seen its weekly sales rates increase 16% over the same period. 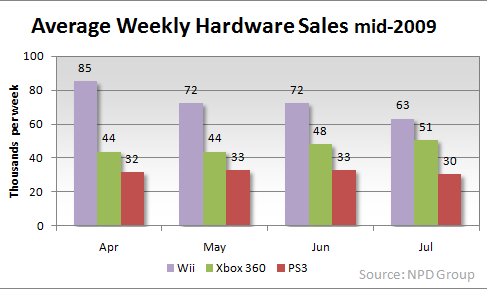 Software could be the essential factor behind these shifts. While Nintendo continues to do well with its older first-party software, it has been several months since the Wii received a significant first-party title. Combined with Wii Sports Resort, we expect New Super Mario Bros. Wii to help sweeten the Wii's appeal through the end of the year. The success of third-party titles like EA Sports Active and Tiger Woods PGA Tour 10s should also help round out the library. By comparison, Microsoft has always focused on leading players to its platform with first-rate third-party software. Combined with the availability of the $200 Xbox 360 Arcade unit, Microsoft has made the case to the consumer that its system is well worth the cost. And if consumers have become even more cost-conscious as a result of the ongoing recession, the consumers willing to spend $300 on a game system may feel they get more value from a $200 system and two inexpensive games than they would from a Wii and a single game (other than the pack-in, Wii Sports). Should recent reports of the Xbox 360 Elite replacing the Xbox 360 Pro at the $300 price turn out to be true, that should continue to improve the value projected by Microsoft's platform. If the Wii were to receive a price cut -- we consider it somewhat unlikely -- then the edge may be taken off any increase in Xbox 360 sales. As for Sony, the PlayStation 3 has seen relatively stable unit sales rates since April. It is possible that 30,000 units a week is the base level that the system can move at its current price. Historically, we note that this is precisely the same level of sales that the PlayStation 3 experienced right before the introduction of the $400 40GB model back in November 2007. Combined with the persistent rumors of a new, slimmer model of the PlayStation 3 hardware and Sony's stated sales goals for the current fiscal year, timing is right for a price cut. An announcement is widely expected this coming week at GamesCom 2009 in Cologne, Germany. As we have said before, we believe that market share and mindshare considerations may now outweigh the need for putting its game division into the black, and consequently we favor a $100 price drop. Gamasutra's full feature includes much more analysis, trends and insight from analyst Matt Matthews on the July numbers, plus essential takeaways as the industry prepares for the holiday season (no registration required, please feel free to link to this feature from other websites).
Console
Get daily news, dev blogs, and stories from Game Developer straight to your inbox
Subscribe