Gamasutra analyst Matt Matthews charts and evaluates the severity of the music game genre's revenue shrinkage -- finding "sales of music games have dropped by more than a factor of five since 2008."
by Staff
November 19, 2010
After months of analyst discussion and shrinking software revenues, Viacom's announcement of its decision to sell respected Rock Band progenitor Harmonix was perhaps the biggest item of evidence yet that the music game genre -- at least, console titles equipped with instrument peripherals -- may be well past its prime. Weak sales of the latest installments in console retail game bundles point to consumer fatigue of both the genre and its high price point. Bundles that retailed well above normal disc-based retail were responsible for the gangbuster revenues initially seen by brands like Guitar Hero and Rock Band, but they also created the impossible comparison points and inevitable year-over-year revenue contractions in the years that followed. Further adding to injury is that once music games were largely perceived to have reached market saturation, their revenues shifted from retail to add-on content like tracks, albums and other DLC. There may yet be new opportunities for the genre in new generations of motion control; Harmonix's Dance Central for Kinect has received widespread critical acclaim. But alongside his in-depth analysis of October NPD results, Gamasutra analyst Matt Matthews discovers just how severe the contraction is, at least at U.S. retail: "Several months ago we looked at the decline of the music game segment, and this month we revisit that area one last time," he writes. "As the figure below shows, sales of music games have dropped by more than a factor of five since 2008." 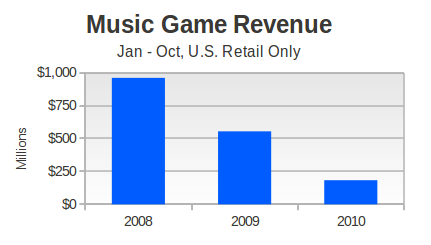 "While the figures above are only for the January – October period, we can at least give full-year figures for 2008 and 2009," Matthews continues. "The total haul for music games in 2008 was over $1.6 billion. That dropped to over $870 million in 2009. Short of a Christmas miracle, music games won't break $400 million for all of 2010."
Console
Get daily news, dev blogs, and stories from Game Developer straight to your inbox
Subscribe